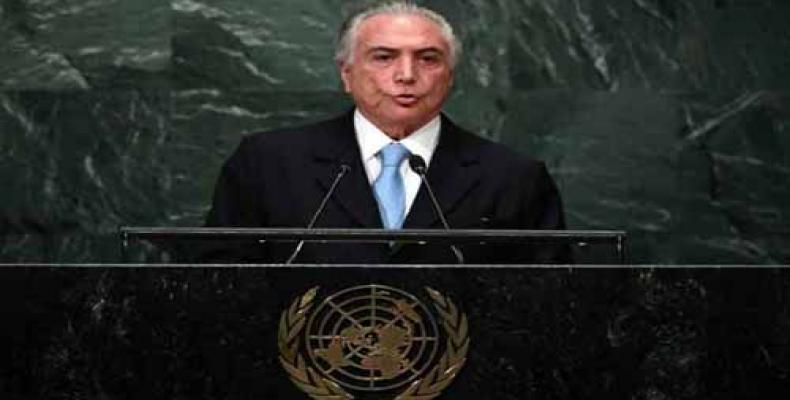 United Nations, September 21 (RHC)-- Brazilian President Michel Temer, who came to power following what has been widely condemned as a parliamentary coup against former President Dilma Rousseff, told the United Nations General Assembly that the impeachment was "constitutional" while protesters outside hoisted banners and chanted "Out Temer."

The delegations of Ecuador, Costa Rica, Bolivia, Venezuela, Cuba and Nicaragua walked out of the auditorium as Temer stepped to the podium to speak.  In his address, Temer said that Brazil lives in a “full democracy” and insisted that the impeachment process against Rousseff followed a “constitutional order.”  He concluded by saying "We have given an example to the world."

By tradition, Brazil has been the first country to address the General Assembly dating back to its 10th session in 1955, when other countries were reluctant to kick-off the event, even the host country, the United States, Brazil volunteered to speak first, and the tradition has endured for more than 60 years.

In his address, Temer also referred to the migrant crisis and the rise of extremism as global “deficits” and said his government is committed to addressing these issues.  He also called on measures to reform the UN Security Council, which critics have long complained serves as an exclusive club with veto power that it can exercise against the larger body.

The Brazilian coup president defended his neo-liberal agenda that has produced deep cuts to popular educational social programs introduced and expanded under Rousseff and her predecessor, Luiz Inácio Lula da Silva, who was also of the Workers Party.  Brazil, Temer said, is following the “right path.”

Temer faces very low approval ratings at home among Brazilians.  He is scheduled to complete Rousseff’s presidential term until the next scheduled election in late 2018, and his government is pressing accusations of corruption against Lula, who is the odds-on-favorite to recapture the presidency.