Evo Morales Calls Israel One of World's Most Barbaric Warmongers 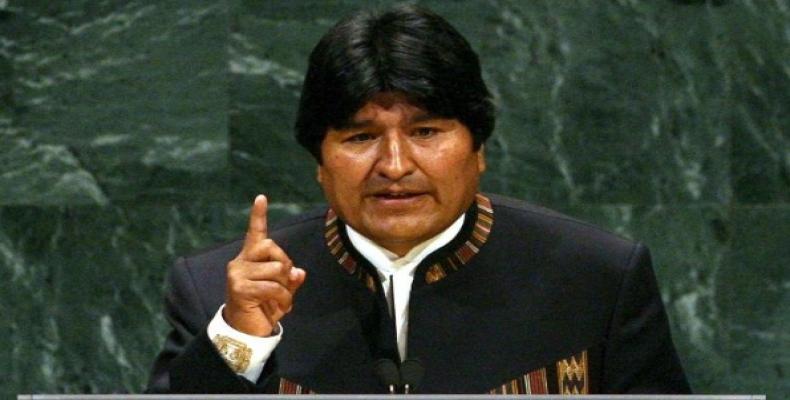 United Nations, September 22 (RHC)-- Bolivian President Evo Morales has condemned the imperialist and warmongering policies of Israel and the United States during his address at the United Nations General Assembly in New York.

Evo Morales said: "Israel's warmongering policies are probably one of the most barbaric examples in the world," as he vigorously condemned Israeli attacks against Palestinian civilians.  "We have to stop the genocide against the Palestinians."

As for the United States, they must immediately end the blockade on Cuba and pay reparations to the island.

Imperialism and capitalism are the root causes of the issues humanity is facing in the 21st century, he added, and the main objective of humanity should be "to eradicate" capitalism.

The Bolivian president told world leaders gathered at the United Nations: "Capitalism is the worse enemy of life and humanity, and of future generations; it destroys Mother Earth; concentrates wealth the hands of a few; and generates extreme poverty."  And he warned: "If we don't build another system soon for society, we will replace sustainable development with sustainable death."

"We condemn violence and terrorism but in order to address terrorism we must address the roots of this plague: wealth is concentrated in the hands of a few: the greater the poverty and inequality, the greater the discrimination, which encourages violence."

The Bolivian leader highlighted that since his country kicked out U.S. military bases, the fight against drug trafficking has significantly improved.  Terrorism and drug trafficking are twins that the U.S. empire uses in order to invade and control the world, I am certain of that.

"When the Drug Enforcement Agency was in Bolivia, only half of the drugs seized was incinerated, the other was to get rich," he said, quoting information from military officials.

Evo Morales rejected the administration of Luis Almagro as the head of the Organization of American States, "We don't need a manager from the empire to govern us," he said, stressing that the existence of the OAS would no purpose if the organization did not respect the sovereignty of peoples.

Bolivian President Evo Morales also expressed his support for the Venezuelan government of Nicolas Maduro which has been targeted by Luis Almagro.