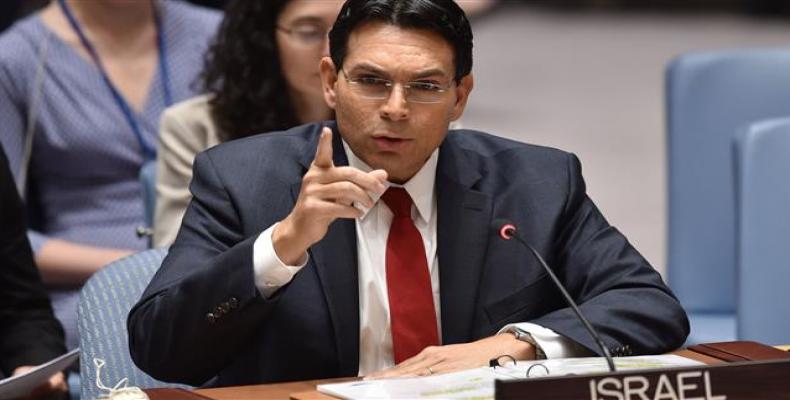 United Nations, August 20 (RHC)-- The Israeli regime has rejected calls by the United Nations chief to  boost protection of Palestinians against persisting Israeli atrocities on protesting civilians in Gaza Strip and the occupied territories, demanding action against Palestinian leaders instead.

"The only protection the Palestinian people need is from their own leadership," Danon further claimed in his statement, blaming the West Bank-based Palestinian Authority for inciting "its people to demonize and attack Jews," as well as the Gaza-based Hamas resistance movement for using "the people in Gaza as hostages."

In his 14-page report, which came after Israeli regime forces killed two more Palestinians in Gaza on Friday, the UN chief laid out four options -- from increasing aid to the Palestinians, sending UN rights monitors and unarmed observers to deploying a military or police force under a UN mandate.

Earlier, UN Secretary General Antonio Guterres put forward options to protect Palestinian civilians, among them the deployment of an armed military or police force to the occupied lands.

"The combination of prolonged military occupation, constant security threats, weak political institutions, and a deadlocked peace process provides for a protection challenge that is highly complex politically, legally and practically," Guterres said.  "The targeting of civilians, particularly children, is unacceptable... those responsible for violations of international humanitarian law must be held accountable."

Israel, however, has defended its use of live ammunition against Palestinian protesters in Gaza by invoking what it claims as its "right to self-defense."

The report by Guterres was requested by the UN General Assembly in response to persisting violence employed by the Tel Aviv regime in the besieged Gaza, where 171 Palestinians have so far been killed by Israeli forces since late March.

The UN chief further stated that the world body was already undertaking many protection initiatives but that "these measures fall short" of the concerns raised in the UN General Assembly resolution.

The resolution garnered a strong majority of 120 votes in the 193-member assembly, with 8 votes against and 45 abstentions. It was put forward by Algeria, Turkey and Palestine after Washington vetoed a similar resolution in the UN Security Council (UNSC) earlier.

In response, the Israeli ambassador claimed that the options recommended by Guterres "would only bring about continued Palestinian suffering at the hands of their leaders," and "will only enable the Palestinians' continued rejectionism."

This is while a UN mandate for a protection force in the occupied territories and Gaza would require a decision from the UNSC, where the US is widely expected to once again wield its veto power to block a measure opposed by Tel Aviv.

A small European-staffed observer mission was deployed in the West Bank city of Hebron in 1994, but the Israeli regime has since rejected calls for an international presence in flashpoint Palestinian areas.