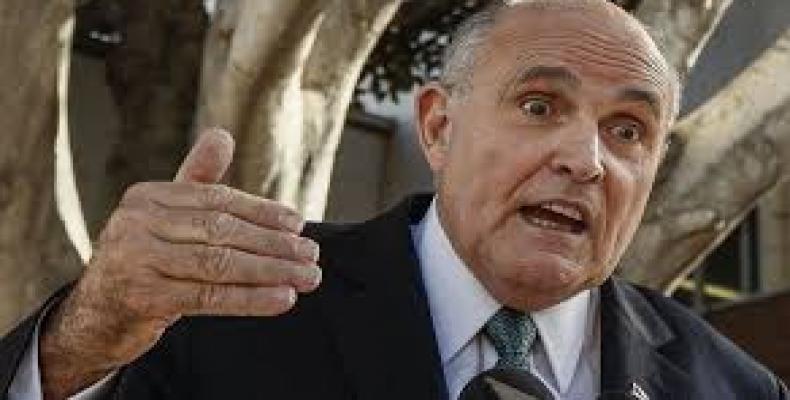 The New York Times says that the billionaire businessman reported a loss of $916 million on his 1995 income tax returns, and, according to tax experts, the tax deduction was so substantial that could have allowed Trump to legally avoid paying taxes for a period of 18 years.

Defending Trump, Giuliani said in an interview with CNN that "this is part of our tax code."  The right-wing Republican politician said: "The man's a genius. He knows how to operate the tax code to the benefit of the people he's serving."

Giuliani said Trump could not be blamed for failing to pay federal income taxes.  "No. The law is responsible for it," he said. "If you have a set of laws, you live by those laws.  And the reality is, you are ignoring completely the fiduciary obligation he has to all the people around him to run his business at the lowest possible expense."

In a separate interview with ABC News, Giuliani said he wants a man who is !a genius at figuring out how to take this country, that's moving in the wrong direction, where we've had a basically jobless recovery, where we've had growth of less than two percent for two years."

Rudy Giuliani asked: "Don't you think a man who has this kind of economic genius is a lot better for the United States than a woman?"

In a statement last weekend, the Trump campaign said that the tax document was obtained illegally and that The New York Times was operating on behalf of the presidential campaign of Democratic rival Hillary Clinton.   In another anti-Trump move, the newspaper called on Latinos to vote for Clinton and help defeat the business mogul on November 8.

The call came in an editorial which drew on Trump's pledge to build a wall on the border with Mexico to prevent migrants from coming to the US and his insults against Mexicans and other minorities throughout the campaign.