Thousands Take Part in Australian Rallies in Support of Refugees 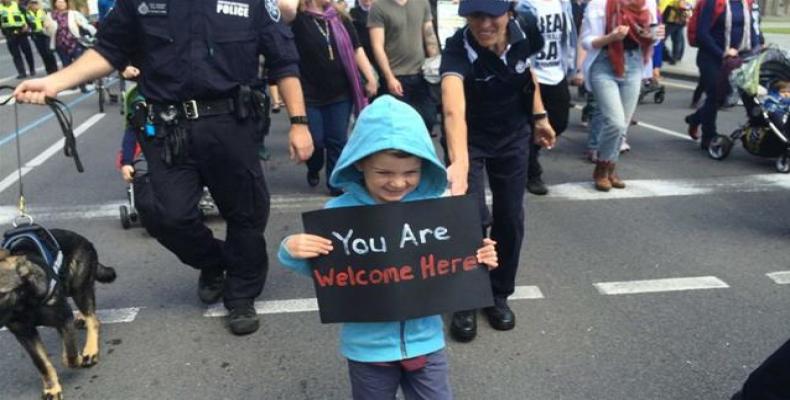 Sydney, October 24 (RHC)-- Thousands across Australia have participated in nationwide rallies in more than 25 cities in support of asylum seekers in the country after recent calls by a lawmaker to enforce a refugee ban.

The rallies over the weekend were organized by the "Welcome to Australia" campaign and aimed at celebrating cultural diversity and promoting compassion and unity in the nation, local press outlets reported.

"The walk is a loud declaration that thousands of Australians believe we are a nation known for our compassion, generosity and welcome," said Chief Executive of Welcome to Austria Mohammad Al-Khafaji, a former refugee.

Al-Khafaji also insisted that the movement has gone global this year, saying: "A community in Anchorage, Alaska, heard about 'Australia's Walk Together' celebration and they were really impressed with its symbolism and its power.

Meanwhile, Tasmanian Governor Kate Warner took part in the rally held in the city of Hobart, calling on Australians to challenge the Islamophobic views of One Nation senator, Pauline Hanson.

She further called on the demonstrators to stand firm in their support for refugees.

Warner underlined that Hansen had "declared that Australia was being swamped by Muslims and in which she reiterated a call for a ban on Muslim immigration."

According to local press reports, hundreds of people took part in the rally in the city of Adelaide marching from the Torrens Parade Grounds to Elder Park.  Participants at the Adelaide rally included state lawmaker Nat Cook, former Greens senator Penny Wright and representatives from the Australian Federal Police.

Well-known Australians who attended the nationwide rallies included political leaders from major parties in the country as well as Missy Higgins, Judith Lucy, and Tom Ballard.