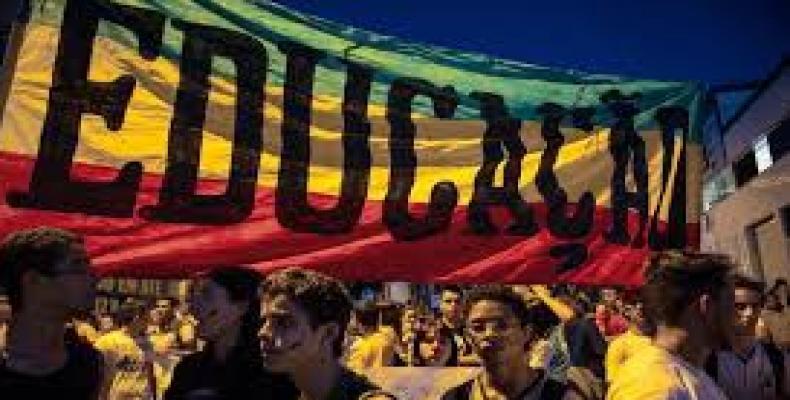 Brasilia, October 28 (RHC)-- Students protesting the neo-liberal educational reforms of Brazil's unelected President Michel Temer have expanded their nationwide occupation to at least 1,108 public schools and universities across 19 states, as well as the federal district that includes the capital, Brasilia.

The protests are led by the Brazilian Union of Secondary Students, known as Ubes, and other local organizations critical of the Temer administration's revisions to the high-school system and the so-called PEC reform, which among other things will end public subsidies to students older than 20 years.

In the state of Paraná alone, students have occupied 851 schools, another 66 in Minas, 13 in Rio Grande do Sul and 10 in Rio Grande do Norte, and Goias.  In the Federal District, and Rio, there are seven occupied schools apiece and in the largest state of Sao Paulo, five schools.

The Brazilian constitution stipulates that 18 percent of the country’s total federal tax budget be allocated to education. But the Senate is trying to reduce that figure.

If approved, PEC 241 would cut government expenditures over the next two decades, reducing it as a percentage of national GDP, which critics argue would translate into an onerous burden on the poor.

Michel Temer, who led the parliamentary coup against President Dilma Rousseff, has introduced a series of sweeping privatization proposals and cuts in education health and other social programs, since he was sworn in last August.

Temer faces very low approval ratings at home among Brazilians. He is scheduled to complete Rousseff’s presidential term until the next scheduled election in late 2018, and his government is pressing accusations of corruption against Lula, who is the odds-on favorite to recapture the presidency.