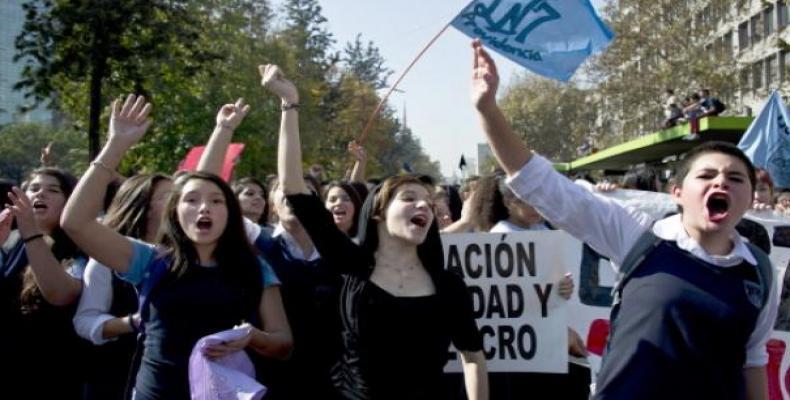 Santiago, March 29 (RHC)-- More than 100 Chilean university students protested Wednesday in front of the headquarters of the country's Constitutional Tribunal against the court's decision to allow universities to charge tuition and to denounce excessive police force against student protesters.

The spokesperson of the National Coordinator of Secondary Students (CONES), Amanda Opazo, presented an official complaint against riot police whose members beat to unconsciousness University of Chile student Fernando Quintana as he and hundreds of others protested the tribunal's Tuesday decision to allow universities to be for profit.

Radio Bio Bio Chile published a Twitter video, showing several riot police beating the young Quintana to unconsciousness then dragging him by one arm across a Santiago street. Students tried to help Quintana as he was surrounded by police.

The students were protesting the Constitutional Tribunal’s 6-4 decision to overturn the recently hard passed Higher Education Law that would have made Chilean university education free. The law had just been signed into effect in late January by former president Michelle Bachelet. According to local media reports, 17 students were arrested in Wednesday’s demonstrations.

Higher education was free in the country until 1981, when Augusto Pinochet's military dictatorship paved the way for the emergence of private universities with no constraints on tuition fees. According to the Organization for Economic Cooperation and Development, Chile has the fourth-most-expensive university system in the world.