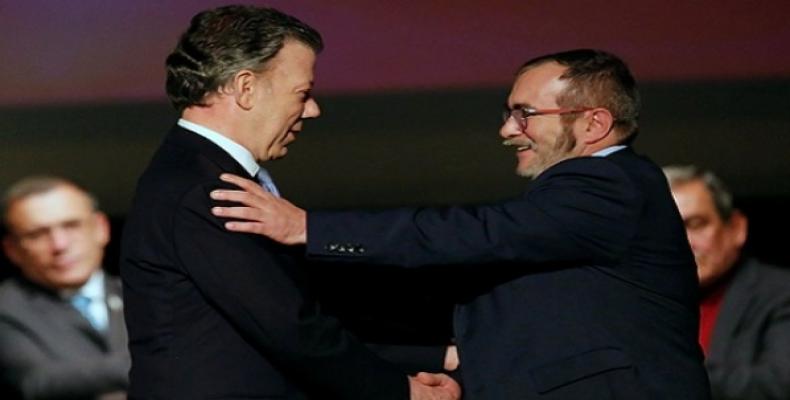 Bogota, November 24 (RHC)-- The Colombian government and the Revolutionary Armed Forces of Colombia have signed a new peace agreement to end the 52-year armed conflict in the country.

President Juan Manuel Santos and leader of the FARC, Timoleon Jimenez, signed the final text on Thursday morning in a ceremony at the Colon Theater in the capital city of Bogota, in a simple ceremony with the presence of local legislators and human rights activists.  Only 800 people attended the signing, due to security measures.

On September 26th, Santos and Jimenez -- also known as Timochenko -- signed the first agreement in Cartagena, accompanied by 13 heads of states and members of international organizations, as well as others guests and citizens that joined in the historic event.  About 2,500 people were invited on that occasion.

The first peace accord was rejected by half a percentage point in a plebiscite on October 2nd, and had a record low voter participation.  After further negotiations in Havana, a second agreement was reached on November 12th.

The new peace accord will now be considered by the Congress and, if passed, will be included in the Colombian constitution.

The majority of political parties in the country support this new agreement and President Santos is confident it will pass in the legislative branch.

Right-wing party Centro Democratico, led by former president Alvaro Uribe, opposed the signing of the new agreement even though the negotiators included several points raised by the "No" campaign.

Uribe has been a strong opponent of the peace talks and the following peace agreement, by campaigning under the false accusations that the text included complete amnesty for guerrilla members who committed crimes, and alleging that there would not be reparations for victims of the armed conflict.