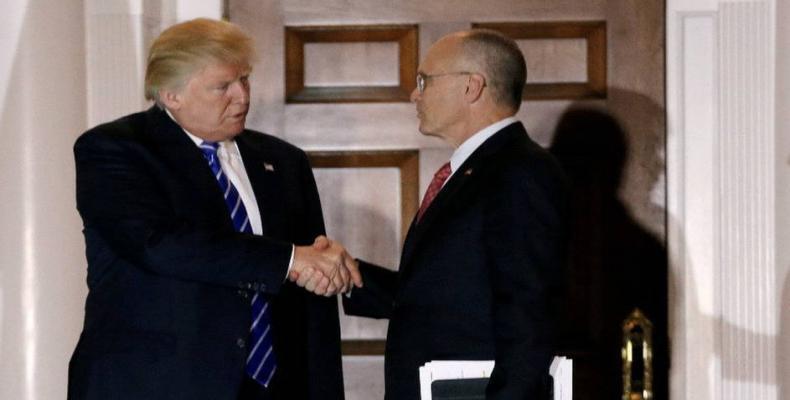 New York, December 12 (RHC)-- U.S. President-elect Donald Trump has picked fast-food CEO Andrew Puzder to become the next secretary of labor.  Puzder is the head of the company that franchises the fast-food outlets Hardee’s and Carl’s Jr.  He is a longtime Republican donor who has been a vocal critic of raising the minimum wage, the Fight for 15 movement, expansion of overtime pay, paid sick leave and the Affordable Care Act.

In 2012, Andrew Puzder made $4.4 million, nearly 300 times more than the average food worker. Kendall Fells of the Fight for 15 campaign said: "Puzder as labor secretary is like putting Bernie Madoff in charge of the treasury."  Puzder has also spoken in favor of having robots replace workers at fast-food restaurants.  In an interview with Business Insider, Puzder said robots are "always polite, they always up-sell, they never take a vacation, they never show up late, there’s never a slip-and-fall, or an age, sex, or race discrimination case."

The Riverfront Times in St. Louis also reports that Puzder was accused of abusing his former wife multiple times.  In one incident in 1986, his former wife said Puzder "attacked me, choked me, threw me to the floor, hit me in the head, pushed his knee into my chest, twisted my arm and dragged me on the floor, threw me against a wall, tried to stop my call to 911 and kicked me in the back."