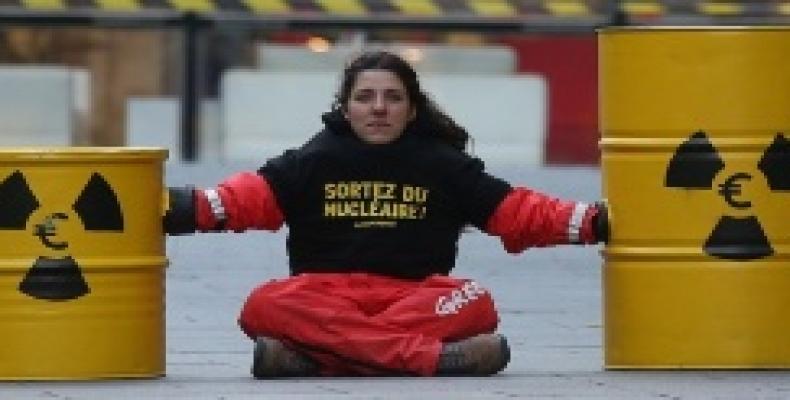 Paris, December 15 (RHC)-- Greenpeace activists blocked access to the Paris headquarters of French power utility EDF on Wednesday in a protest against the company's nuclear activities.

Some 30 activists of the environmental organization scaled the front of the building close to the Champs Elysees and unfurled a banner with a picture of EDF Chief Executive Jean-Bernard Levy.  Others sat at the entrance to the building, their hands linked through large oil barrels painted yellow and plastered with radioactive warning stickers.

The banner stated EDF was $79 billion in debt, which would continue if it pursued its nuclear policy.  EDF said it would file a complaint against Greenpeace over the action at its headquarters, which it described as a "violent aggression."

French state-controlled utility EDF, is the world's single biggest nuclear power operator. It manages 58 French reactors that provide over 75 percent of electricity in the country.

Greenpeace said EDF had not been honest with taxpayers about indebtedness caused by the soaring cost of maintaining its nuclear fleet, and what its says is the company's unwillingness to plan for a nuclear-free France.