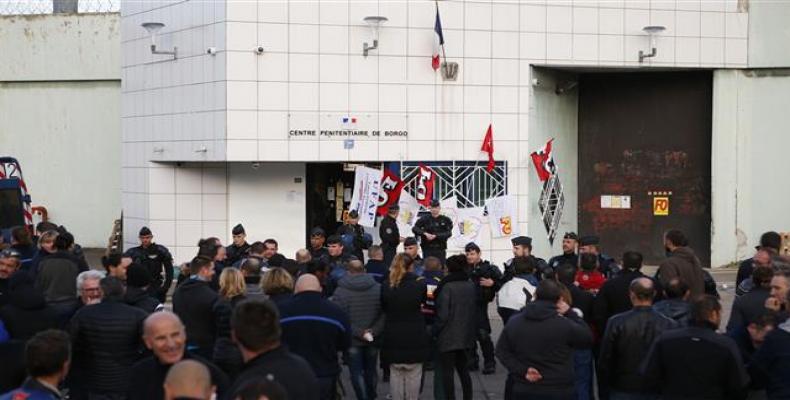 Paris, January 22 (RHC)-- French unions pushing for better safety and wages have vowed a “total blockade” of prisons as their dispute with the government worsens.  Overnight, France’s Justice Minister Nicole Belloubet said she would meet with union leaders in a push to end the crisis.

“The Minister of Justice wishes to resume dialogue immediately,” the ministry said in a statement, adding it was the responsibility of all sides to ensure that prisons were functioning.

But a Sunday latest attack on guards is likely to harden attitudes among the major French prison unions ahead of the blockade and follows a week of tension and strikes over security and employment concerns.

The male and female guards were attacked in a detention center at Longuenesse prison near Calais at 6:30 p.m., when the cells were still open, according to a prison union official.  “This is once again an attack on the staff, we cannot stand it anymore: it’s a daily thing,” said Yannick Lefebvre from Ufap-Unsa union.

On Saturday, the CGT and Ufap-Unsa unions rejected proposals to end the standoff.  The third union representing prison guards -- the FO -- has taken a more hardline approach to government talks.

“We are very shocked (by the latest attack).  It will only amplify the grumbling and there will be a hardening tomorrow at Longuenesse,” said the FO union's prison inter-regional secretary Julien Martin.

The CGT has said government proposals to end the strike action fall “well short” of their demands, and the Ufap-Unsa, the biggest union representing some 40 percent of prison staff, has backed them.

FO has so far not joined mediation talks and rejected a draft agreement that proposed the creation of 1,100 guard jobs over four years, “including a first tranche of 100 jobs from 2018.”