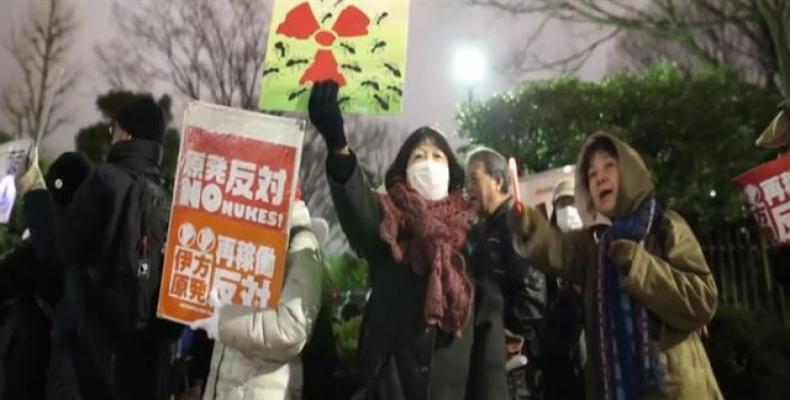 Tokyo, February 11 (RHC)-- Japanese protesters have rallied outside Prime Minister Shinzo Abe's office in the capital, Tokyo, urging him to shut down nuclear power plants in the country, which was hit by one of the world's worst nuclear incidents nearly six years ago.

Carrying anti-nuclear signs, the demonstrators on Friday also called on Abe to quit his policy of restarting the country's nuclear reactors.  The Japanese government sought to greatly reduce the role of nuclear power since the Fukushima nuclear disaster in 2011.

On March 11th that year, a huge tsunami caused by a nine-magnitude earthquake wreaked heavy damage on the Fukushima Daiichi nuclear power plant’s cooling systems that led to three meltdowns and the release of vast amounts of radiation into the surrounding environment.

The incident, considered the world’s worst nuclear accident since the Chernobyl nuclear disaster in 1986, also prompted the evacuation of 160,000 people from areas near the power plant.

In 2014, the succeeding government changed the national energy plan and decided to reopen several of the plants that meet new safety regulations implemented after the catastrophic event.  Abe said at the time that nuclear power would be used to combat global warming and achieve an affordable energy supply.