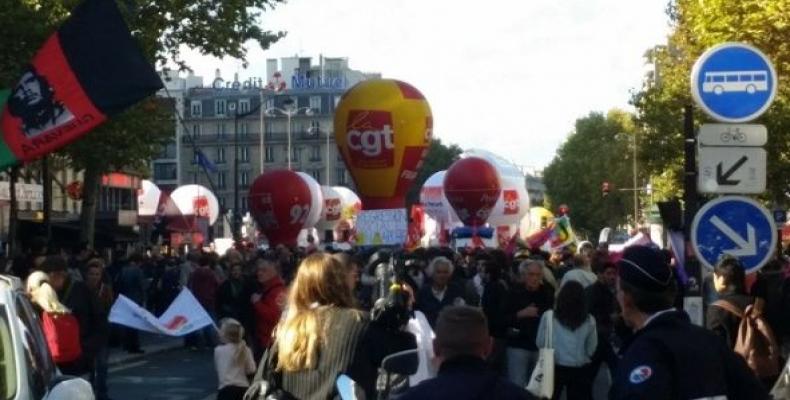 Paris, October 20 (RHC)-- Thousands of protesters have taken to the streets of Paris in protest of French President Emmanuel Macron’s labor law passed in early August. Waving flags with images of Che Guevara and the General Confederation of Labor logos, protesters demanded a repeal of the reforms.

In a press release the CGT, along with the French Democratic Federation of Workers, the National Union Lyceenne, French Confederation of Christian Workers, said: "Our citizens are increasingly challenging these ordinances: 65 percent of them reject them and 57 percent approve of the mobilizations against these governmental projects.”

CGT spokesperson Fabrice Angei said that October 19th was a “day of action," adding that “truckers proved to us that these ordinances could be defeated,” referring to the September 25th truck driver strike that blockaded up to eight fuel depots in northern France to protest the labor law. Angei said the truck driver's actions led them to win an “allowances into the base salary.”

Workers are protesting Macron’s law which gives more negotiating power to employers, rather than being bound to established industry-wide agreements. Workers can also be dismissed more easily, without fear of reprisal by labor tribunals. The reforms also eliminate early retirement guarantees.

Overall, the five reforms included in the law are “aimed to dismantle collective bargaining” and hand over labor negotiating power to big corporations. The law was quickly passed by both French legislative houses. Yesterday's strike followed several CGT strikes and protested across the laws since late September. Their most recent street march took place October 10.

Macron has responded to these demonstrations by saying, “Democracy does not happen in the streets.” Yet, the street and strikes are the only places where French workers have been able to gain traction against the law. The reforms were unexpected from Macron who championed a more liberal platform as a candidate.

Camille Groux an engineer from Orleans told the Washington Post that “Macron’s actions are tantamount to a ‘betrayal’.” Calling the reforms, “extreme” that “undermine our democracy by giving the power to the heads of companies instead of us, the people.”

Some 3.5 million people are currently out of work in France. Macron has claimed the law will give employers more incentives to hire workers if they can fire them without financial risk. It is set to go into effect in January 2018.