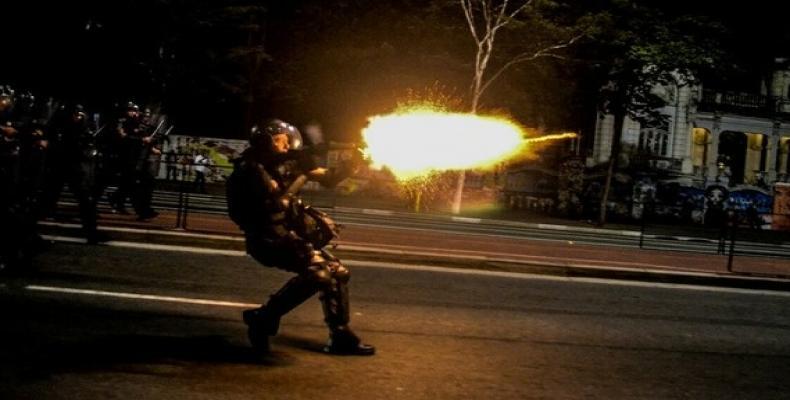 Brasilia, December 15 (RHC)-- Thousands of people have poured into the streets of least 15 cities across Brazil to protest the Senate’s approval of a controversial austerity plan being pushed by unelected President Michel Temer to limit public spending and institutionalize neo-liberalism for the next two decades.

The biggest demonstrations were held in the capital, Brasilia, and major cities like Sao Paulo, Rio de Janeiro, Salvador, and Porto Alegre, where protesters faced a harsh crackdown by riot police and clashes erupted leaving several injured and dozens arrested.

Brazil’s Senate approved the constitutional amendment, known as PEC 55, by a vote of 53 to 16 on Tuesday. It is expected to become law on Thursday. The amendment freezes federal spending to inflation for two decades in a move critics say undermines basic constitutional rights.

Police fired tear gas to disperse the protesters, who argue that PEC 55 will affect the poorest people in the country with cuts to government expenditures on social programs, especially on the health and education.

“It is completely inappropriate to freeze only social expenditure and to tie the hands of all future governments for another two decades,” Alston said. "This amendment will place Brazil in a socially retrogressive category all of its own."

Meanwhile social movements, political organizations and grassroots groups have already announced that more protests can be expected across Brazil in coming days.

President Temer, who backed the parliamentary coup against former President Dilma Rousseff, has already introduced a series of sweeping privatization proposals and pushed for major cuts to social programs, including a controversial pension reform plan, since he was sworn in as president in August.

The unelected government faces very low approval ratings among Brazilians.  Despite the fact that nearly two-thirds of Brazilians think Temer should resign by the end of the year, according to polls, he is scheduled to complete Rousseff’s presidential term until the next election in late 2018.  His government is also promoting corruption accusations against former President Luiz Inacio "Lula" da Silva, who is the odds-on favorite to recapture the presidency.