Brazilian Police Crack Down Again on Anti-Temer Protests in Rio 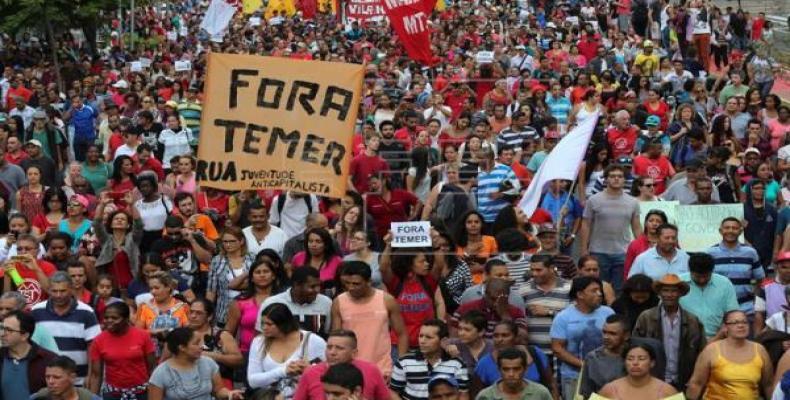 The protests, which also rocked other cities, are the latest in a wave of massive demonstrations led by social movements and labor unions that have criticized the “parliamentary coup” against ousted President Dilma Rousseff and the austerity policies Temer’s government is swiftly rolling out without a popular mandate.

The most recent march in Rio de Janeiro brought an estimated 5,000 people to the streets, according to Reuters sources, and took aim at the hotly controversial economic reforms Brazilian economists have dubbed “permanent austerity” and “shock therapy.”  Known as PEC 241, the Portuguese acronym for Proposed Constitutional Amendment, the pending proposal would cap public expenditures in line with inflation until 2037.

“Without this money for 20 years, we are not going to be able to survive,” a protester at the march, Ian dos Santos, told AFP.  “Schools and public universities aren’t going to have resources.”  Santos added: “We’re fighting today for our rights as students."

The march comes as high school students have also mobilized against PEC 241, occupying at least 600 high schools across the country in peaceful protest against the plan that they criticize as an attack on public education.

Riot police responded to the protests around 8 p.m. local time, using teargas to disperse demonstrators clogging a thorough way in central Rio de Janeiro.  Several protesters and at least one police officer were reportedly injured in the clashes.  Other smaller standoffs between marchers and police reportedly continued over the next hour in nearby streets and squares.

Protests also simultaneously shook Sao Paulo, where Brasil de Fato reported that 20,000 demonstrators joined the march.  Organizers in Sao Paulo have called for another round of marches against PEC 241 on Friday, while other actions also continue.

Temer’s administration has billed PEC 241 as a surefire solution to boost the ailing economy and close the budget deficit.  But critics fear the that the unprecedented neo-liberal cuts will undermine constitutional rights and ravage public education, health care, criminal investigations into corruption, and other social programs.

The PEC 241 is expected to be passed in Congress imminently after already securing a first-round vote in the lower house.