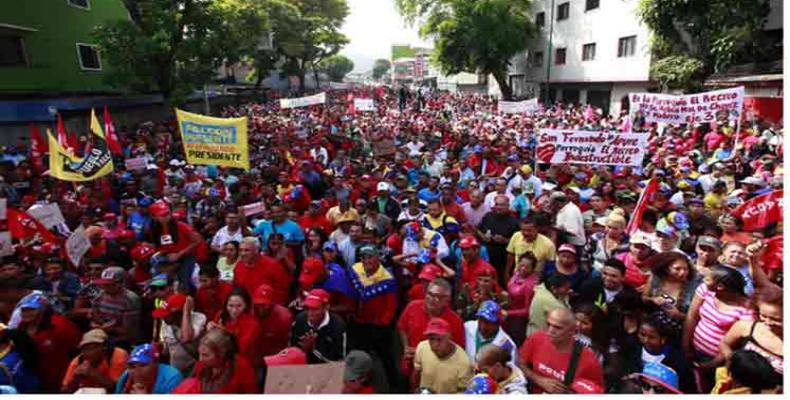 Caracas, April 19 (RHC)-- Tens of thousands of Venezuelans are marching in Caracas on Wednesday in defense of the Bolivarian Revolution and to reject coup plans by the right-wing opposition.

Venezuelan President Nicolas Maduro, during a nationally-televised address Tuesday evening, accused the U.S. government and specifically the State Department of giving "a green light" for a coup in the country.  And Maduro announced that security forces had arrested an “armed commando group sent by the opposition in order to attack the mobilization called by the right-wing for Wednesday to generate violence and deaths in the country.”

The opposition is convening what they are calling a "Mega March" demanding Maduro's ouster, which comes after more than a week of violent protests have left several dead and caused an estimated 50 billion bolivars in damages.  Among the fatalities is an 83-year-old woman who died after not being able to receive medical attention due to opposition roadblocks.

Foreign Minister Delcy Rodriguez said the Chavista march is a "lesson" to those who "promote intervention, but also to the imperial powers that today dare to stick their noses where no one has asked them to."

Rodriguez said Venezuela would defend its sovereignty in any scenario, even if it's not as part of the Organization of American States.  The head of the regional bloc, Luis Almagro, has been working with Venezuelan opposition leaders to spearhead a campaign to apply the so-called "Democratic Charter" against the country, effectively removing Venezuela from the OAS.  Venezuelan leaders maintain this is part of a plot to justify an intervention.

Delcy Rodriguez said: "The project for Venezuela is not to overthrow President Nicolas Maduro, but rather the intervention and permanent tutelage that will prevent Venezuela from continuing to develop its project of a great nation, its Bolivarian project, but also what it has meant as an ideological reference for the region."