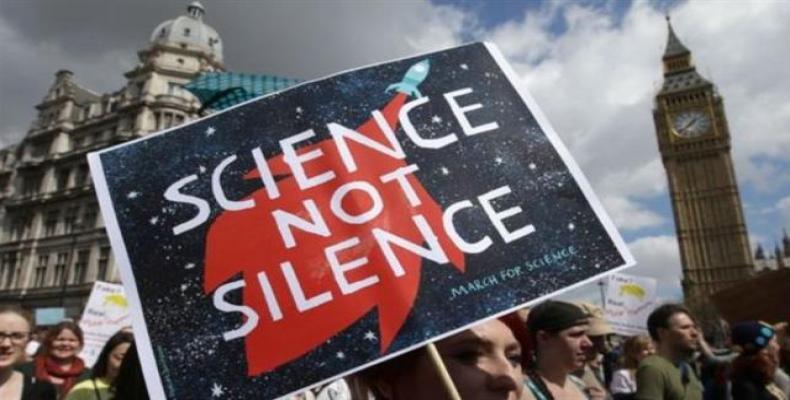 London, April 24 (RHC)-- Thousands of protesters took to the streets across the United Kingdom over the weekend to join a global protest against U.S. President Donald Trump’s policies, which they see as a serious threat to the academic world.

Demonstrators, including scientists and academics, rallied from the Science Museum to Parliament Square in London on Saturday.  The March for Science, was part of a global movement aimed at challenging Trump's questioning of climate change and proposed budget cuts to federal science programs.

The rally organizers in the UK said they were concerned that rhetoric about academics threatened to override research.  They noted that the rise of misinformation makes it crucial to highlight “the vital role that science plays in each of our lives and the need to respect and encourage research that gives us insight into the world.”

“Science and everyday life cannot and should not be separated,” said one protester.  The first ever March for Science, which coincided with Earth Day, is also aimed at calling on politicians to protect the environment.

Donald Trump has not only denied climate change, but also referred to it as a plot targeting the U.S. economy.  He argued that global warming was “created by and for the Chinese” to attack American industries.