Daesh Traps Up to 20,000 Civilians in Mosul Old City 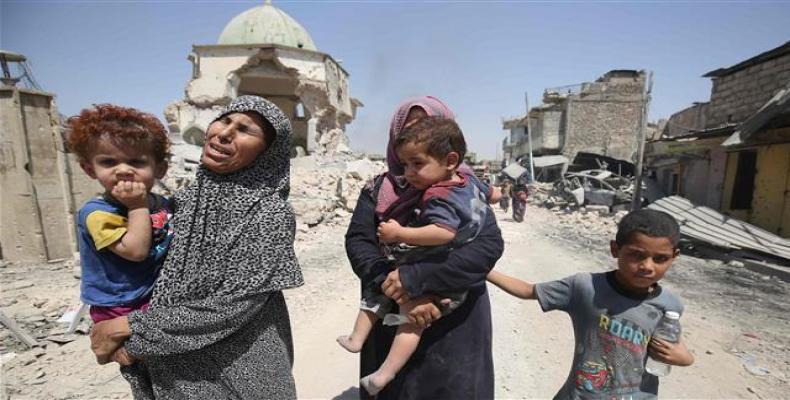 United Nations, July 6 (RHC)-- A senior UN official has warned that up to 20,000 civilians have been trapped in the remaining areas controlled by Takfiri Daesh terrorists in Mosul’s Old City.

“Our estimate at this stage is that in the final pockets of the Old City, there could be as many as 15,000 civilians, possibly even as high as 20,000,” UN humanitarian coordinator in Iraq Lise Grande said on Thursday.

“The people that are still trapped inside of these pockets are in terrible condition,” facing shortages of food, she said.  “They’re in extreme danger from bombardment, from artillery crossfire.  The [Daesh] fighters that are still there are still directly targeting civilians if they try and leave."

Iraqi forces are engaged in heavy fighting with Daesh terrorists to recapture a small pocket of territory on the west bank of the River Tigris.

In the latest battles, the Iraqi federal police forces reportedly captured an underground Daesh training camp in western Mosul.  The camp which is as large as 1,500 square meters at the depth of 10 meters was built for Daesh terrorists to receive heavy military training.

According to Iraq’s al-Sumariah news network, Daesh executed 200 Iraqi civilians on Tuesday as the civilians were trying to flee the city of Tal Afar, located 63 kilometers west of Mosul, to government-controlled areas in Nineveh Province.

Daesh named Mosul as its so-called headquarters in Iraq back in 2014, the year it launched a terrorist campaign inside the Arab country.

Iraqi forces have now pushed Daesh into a shrinking rectangle no more than 300 by 500 meters in area beside the Tigris River.