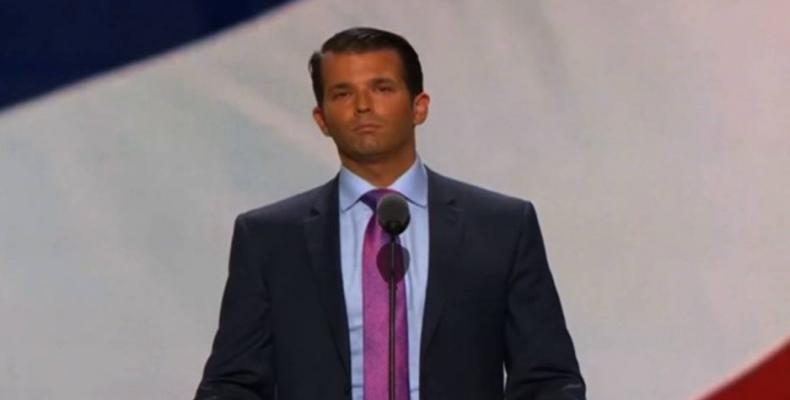 Washington, July 12 (RHC)-- In the United States, the White House is in crisis mode following revelations that Donald Trump’s own son openly embraced an effort by the Russian government to peddle information incriminating Hillary Clinton in an attempt to help Trump win the election.

On Tuesday, Donald Trump Jr. personally released a series of e-mails dealing with a meeting he had in June 2016 at Trump Tower with Trump’s son-in-law Jared Kushner, then-campaign manager Paul Manafort and a person described to Trump Jr. as a "Russian government attorney."

The meeting has been the focus of a series of articles in recent days by The New York Times. Trump Jr. released the e-mails shortly after the Times told him they were about to publish the content of the emails.

The explosive e-mails begin with a message from music publicist Rob Goldstone about how the crown prosecutor of Russia had offered to provide the Trump campaign with "some official documents and information that would incriminate Hillary."  Goldstone went on to say: "This is obviously very high level and sensitive information but is part of Russia and its government’s support for Mr. Trump."

Minutes later, Trump Jr. replied: "If it’s what you say I love it especially later in the summer."  Within a week -- on June 9 -- Trump Jr. met with a Kremlin-connected attorney Natalia Veselnitskaya at Trump Tower.  The meeting had been kept secret until Kushner recently made reference to it in a revised version of a form required to obtain a security clearance.

Earlier this week, Donald Trump Jr. hired a personal lawyer amid the ongoing controversy.  The attorney, Alan Futerfas, began his career as a top defense lawyer for the mob.  The White House has been almost entirely silent amid the growing scandal.  White House press briefings have all been off camera this week.

On Tuesday, during another off-camera press briefing, deputy White House spokesperson Sarah Huckabee Sanders read a short statement by President Trump, in which he said, "My son is a high-quality person and I applaud his transparency."