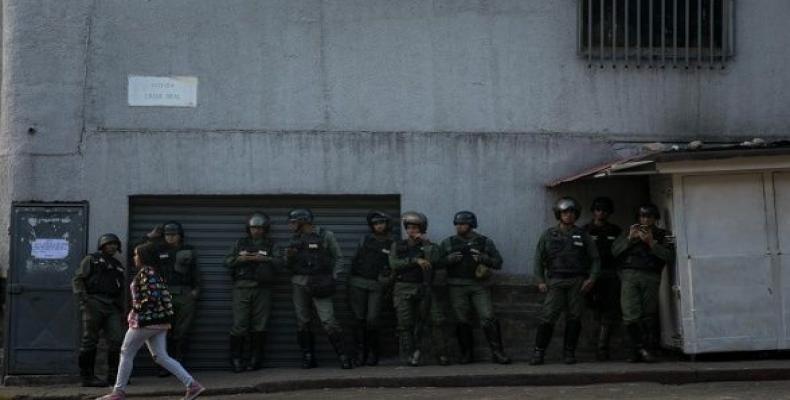 Caracas, January 21 (RHC)-- The Venezuelan Ministry of Defense announced Monday that the Bolivarian Armed Forces have repelled an attempted attack on their facilities in Caracas.

In a statement, the Ministry of Defense reported that the attack occurred in the middle of the night of Monday, January 21 at approximately at 2:50 a.m. local time.  "A small group of assailants assigned to the zone Commando No. 43 of the Bolivarian National Guard, betraying their oath of allegiance to the Homeland and its institutions, launched the attack," said Captain Gerson Soto Martínez, commander of the Macarao police coordination post.

From the post, the assailants "moved on two military vehicles, then broke into the headquarters of the urban security outpost located in the town of Petare, Sucrem, removing a cache of weapons of war and kidnapping under threat of death, two officers and two national guard members of the aforementioned outpost."

He also detailed that the criminals surrendered and were captured at the headquarters of the Waraira Repano special security unit in Cotiza, in the town of Libertador, also affiliated with the Bolivarian National Guar. " The Ministry of Defense explained that during the detention it was possible to recover the stolen weaponry. In addition, the detainees "are providing information of interest to the intelligence agencies and the military justice system."

The Bolivian Armed Forces categorically rejected these acts, "which are certainly motivated by dark interests of the extreme right and are contrary to the basic rules of military discipline, honor and the traditions of our institution."

The president of the National Constituent Assembly (ANC), Diosdado Cabello, rejected the theft of military installations and said that the intention was to generate violence and anxiety in the population.