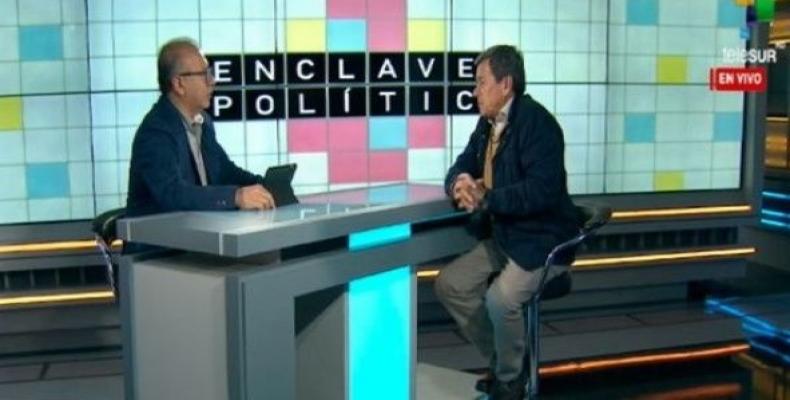 Bogota, July 26 (RHC)-- In Colombia, the chief negotiator of the National Liberation Army (ELN) in peace talks with the government, Pablo Beltran, said that the objective of the third round of negotiations is to reach a “temporary and renewable” bilateral ceasefire, a process which he said takes time because it requires “very precise procedures.”

During an interview with TeleSUR on the Enclave Politica program, Beltran said that the ELN is committed to peace talks and the peace process, and that a consensus has emerged among its members that there “must be a bilateral ceasefire.”

The task of the third round of dialogue is “to make the agreement, design the protocols, sign them, and then apply them.  This round must be about the bilateral ceasefire that we want to last beyond the visit of Pope Francis,” according to Beltran.

Beltran emphasized that the group's motto has always been to “be with the people, and that there is a large sector of Colombian society that wants peace.”  The ELN has been accused by some of those opposed to peace talks for allegedly only being interested in peace because their political project has “failed.”

The reason for being in the ELN, he said, is to always be with the people and acting where there is social change and struggle.  Beltran said that at the heart of the peace talks is “that there is participation so that the people say how Colombian democracy should be... that is why there are sectors of the right that oppose peace.”

“Some sectors in the government want an expedited negotiation, but we want things to be done well so that it is durable,” he said regarding delays in the process.

“We have lost 26 months in the negotiations because of the government tactic to place the ELN negotiations behind those with the Revolutionary Armed Forces of Colombia – People's Army (FARC),” he said. “There is a sector of the hard right that is going to oppose anything that signals peace.”

While dialogue progresses, the ELN still is active and present in several regions of Colombia, where the chief negotiator said they have programs and popular support. “The ELN is alive, it is acting,” he said.