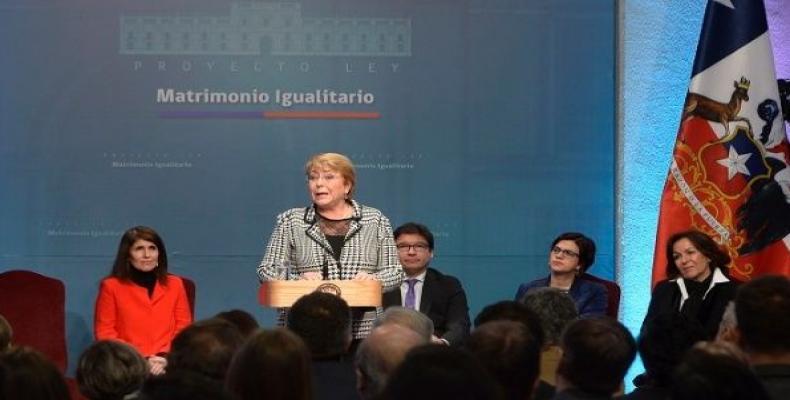 Santiago de Chile, August 31 (RHC)-- President Michelle Bachelet of Chile has sent a bill on same-sex marriage to congress — one of her campaign promises — a few months before her presidential term ends.

The bill, which includes the possibility of adoption, comes two years after the Civil Union Agreement was approved, one of the main demands from LGBTI and other social organizations.

It also comes on the heels of the abortion law passed on August 21st, which legalized abortion for therapeutic reasons, after more than two years of controversy and deliberations.

"We are complying with our word to Chile and also to the world," Bachelet said during a press conference in Santiago de Chile.

The president seeks to carry out the initiatives she promoted as part of her government since her second term began in March 2014.  There are only three months left until the South American nation holds presidential elections and seven months before Bachelet leaves office.

Education reform still needs to be approved by Bachelet, however, as thousands of students have taken to the streets to demand swift action against their crippling debts.

For Patricio Navia, an analyst at the University of New York, "Bachelet needs to strengthen her legacy of reforms," since for the upcoming elections the right-wing former president Sebastian Piñera leads the polls.

"As educational and tax reforms are likely to be hampered and restrained by the next administration, Bachelet wants to go down in history as the president who decriminalized abortion and pushed for equal marriage," Navia told AFP.

Piñera has said that he doesn't support the free education program proposed by Bachelet but will support a system of credit and scholarships.  He also said he will not reform the 1981 Constitution that the dictatorship of Augusto Pinochet imposed.

Bachelet sent a bill reforming the pension system in the country and also announced plans for modernizing the immigration law, both of which were inherited from the Pinochet era.