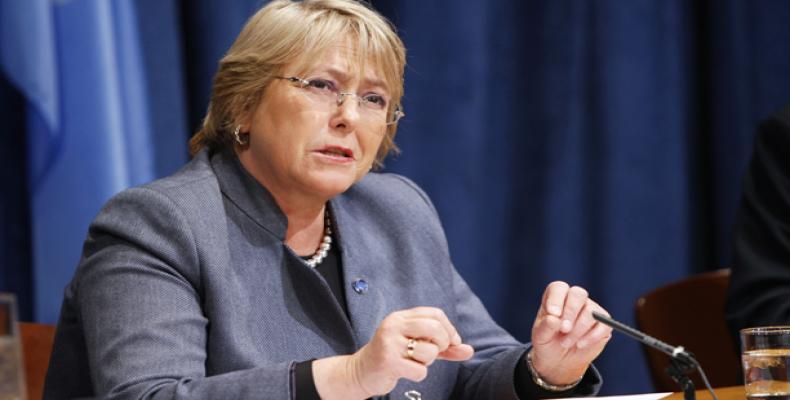 Santiago de Chile, April 5 (RHC)-- Chilean President Michelle Bachelet has put forward a bill to rewrite the country's 1980s constitution, a relic of the dictatorship era that terrorized citizens for 17 years under the military regime of General Augusto Pinochet.

“By signing and sending to Congress the bill to reform Chapter 15 of the current constitution, we finally open the door for Chile to have a Magna Carta that represents us, that embraces our diversity and that gives us the tools we need for our life together," Bachelet said during a speech in the Palace of La Moneda in the capital city of Santiago.

Bachelet, elected for a second term in 2013 after serving as president from 2006 to 2010, added that the bill is a first step toward a Constitutional Convention to rewrite the constitution, which she vowed would be a process carried out "in democracy and together with the citizens" of Chile.

"We are fulfilling each of our commitments,” said the president. “And we will follow in the same way until the end. We are not going to fail Chile, our democracy or our history."  Bachelet announced the reform on January 16th after a popular education campaign gearing up for the eventual rewriting of the constitution was launched in December 2015.  The government spent more than a year working to engage citizens in dialogue ahead of plans to draft the new constitution in 2017.

The Chilean Congress, which will be renewed after the elections on November, will discuss what method will be used to draft a new Constitution.  In case legislators don’t reach an agreement, the president can call for a plebiscite in order for citizens to select one of the options.  The current constitution in Chile has been in place since 1981, pushed through under the regime of former dictator Augusto Pinochet.  Bachelet presented the constitutional reform as one of her key promises during her last presidential campaign.

Bachelet proposed during the campaign to reform the constitution through a Bicameral Committee of Congress, a mixed Constituent Convention with lawmakers and citizens, or a Constituent Assembly.  After this, Chileans will ultimately decide whether or not to ratify the new Constitution.

"We all have a great responsibility: the government, parliament, political parties, civil society, lawyers, all without exception we must be up to faithfully respect the will of the people," said Bachelet.

Pinochet's U.S.-supported dictatorship lasted from the 1973 military coup ousting socialist President Salvador Allende until 1990, but much of the policy framework of the era continues to haunt the Chilean constitution.  His regime claimed the lives of an estimated 3,200 people and led to the torture of 38,000 people.