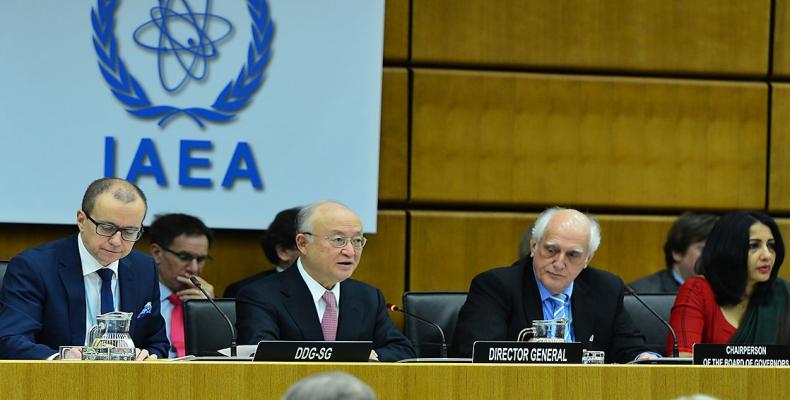 Rome, October 9 (RHC)-- The International Atomic Energy Agency (IAEA) and many world leaders have unanimously thrown their weight behind the 2015 nuclear agreement between Iran and the P5+1 group of countries, rejecting U.S. President Donald Trump’s claims that Tehran has violated the “spirit” of the deal.

IAEA Director General Yukiya Amano in a statement on Monday once again confirmed that Iran was in compliance with its commitments under the nuclear agreement, known as the Joint Comprehensive Plan of Action (JCPOA).  Amano spoke during the 20th Edoardo Amaldi Conference in Rome.

In a meeting with senior U.S. military leaders in the Cabinet Room of the White House in Washington on Thursday, Trump accused Iran of failing to act in keeping with the international nuclear deal, saying: “They have not lived up to the spirit of the agreement."

U.S. President Donald Trump has accused Iran of not living up to the spirit of the international nuclear deal.  Trump is a stern critic of the JCPOA, which was negotiated under his predecessor Barack Obama, and has desperately sought a pretext to scrap or weaken the deal.

Iran and the five permanent members of the United Nations Security Council -- the United States, France, Britain, Russia and China -- plus Germany signed the nuclear agreement on July 14, 2015 and started implementing it on January 16, 2016.

Under the JCPOA, Iran undertook to put limitations on its nuclear program in exchange for the removal of nuclear-related sanctions imposed against Tehran.

Since the JCPOA Implementation Day, the IAEA has been verifying and monitoring Iran’s compliance with its nuclear-related commitments under the nuclear deal and has consistently verified the Islamic Republic’s compliance.

Meanwhile, European Union's foreign policy chief, Federica Mogherini, also said on Monday that Iran's compliance with the JCPOA had been verified on at least eight separate occasions, calling for efforts to honor international cooperation instead of dismantling them.

Speaking through video conference, Mogherini said it was time to “invest in international cooperation” and “open new channels and not destroy the ones we already have," adding that it was “certainly not the time to dismantle them.”

In a related development, German Foreign Minister Sigmar Gabriel told reporters in Berlin on Monday that his country was concerned about Trump’s possible announcement that the JCPOA had not been adhered to, saying this would turn North Korea off any accord to halt its nuclear weapons program.

Trump is reportedly planning to “decertify” the nuclear agreement with Iran later this month.  According to reports, the U.S president plans to declare that the nuclear deal is not in the national interest of the United States and kick the issue to a reluctant Congress.