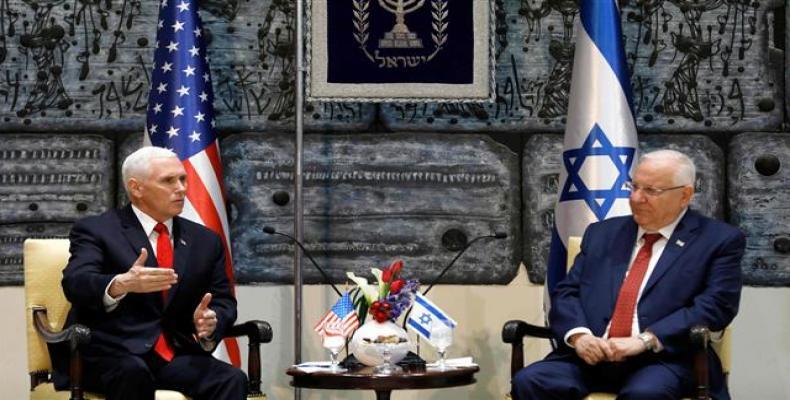 Jerusalem, January 24 (RHC)-- U.S. Vice President Mike Pence has underlined Washington’s resolve to change Iran’s nuclear deal, warning that the U.S .will withdraw from the agreement if it is not altered.

During a meeting with Israeli President Reuven Rivlin in Jerusalem on Tuesday, Pence said that "the time has come” for Washington’s desired changes in the deal, adding: “If our allies will not join us, President [Donald] Trump has made clear we will withdraw from the Iran nuclear deal immediately.”

Pence made the remarks amid the ongoing wave of protests and general strikes across the Palestinian territories in protest at his visit to the Old City of Jerusalem.

On January 12, Trump extended waivers of economic sanctions on Iran for another 120 days but said he was doing so “for the last time.”  Although the U.S. president declined to withdraw from the Iran deal — which he has long railed against and promised to “rip up” — he gave a four-month deadline to the US Congress and America’s main European allies to address what he called the “disastrous flaws” of the deal.

The agreement, reached between Iran and the P5+1 countries -- the US, the UK, France, China, Russia and Germany -- puts limitations on parts of Iran’s nuclear program in exchange for removing all nuclear-related sanctions.  A decision to reimpose sanctions would have effectively ended the Iran nuclear agreement.

The European parties to the deal, China and Russia have made it clear that they will not reopen negotiations on the deal, which they say is working as it is; and Trump’s demands could thus only be addressed by domestic US law, with no jurisdiction over Iran or the International Atomic Energy Agency, and with no direct effect on the JCPOA.

Iran says it would commit to no obligation beyond those it has already agreed to under the JCPOA and that Tehran would not renegotiate the deal.