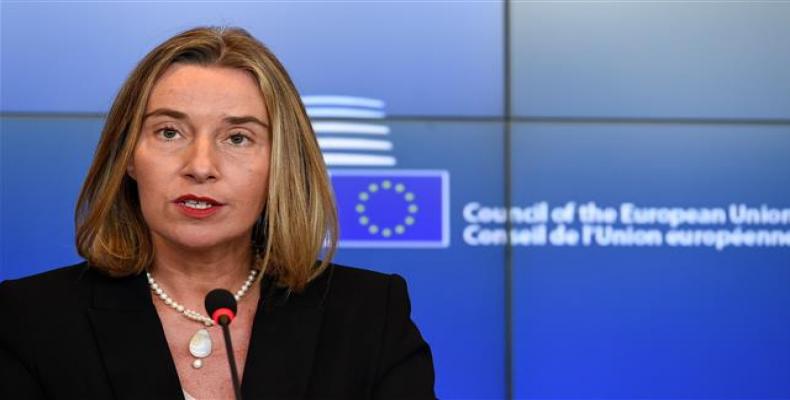 Luxembourg, October 17 (RHC)-- European Union foreign ministers have reaffirmed their support for the historic nuclear agreement between Iran and the P5+1 group of countries, saying the accord is working and is a key part of non-proliferation efforts.

The union’s foreign ministers held a closed-door meeting, chaired by EU foreign policy chief, Federica Mogherini, on the best way to proceed on the Iran issue in Luxembourg on Monday.  The meeting came three days after U.S. President Donald Trump refused to formally certify that Iran was complying with the deal, known as the Joint Comprehensive Plan of Action (JCPOA), and now warns that he might ultimately terminate the agreement.

While Trump did not pull Washington out of the nuclear deal, he gave the U.S. Congress 60 days to decide whether to reimpose economic sanctions against Tehran that were lifted under the pact.  Reimposing sanctions would put the U.S. at odds with other signatories to the accord and the European Union.

The top EU diplomats urged U.S. lawmakers not to reimpose sanctions on Tehran and warned against the serious consequences for regional peace of a failure to maintain the international agreement backed by the UN Security Council.  After the meeting, the foreign ministers issued a statement, expressing their determination to fully implement the international nuclear agreement.

Iran and the five permanent members of the United Nations Security Council -- the United States, France, Britain, Russia and China  -- plus Germany signed the nuclear agreement on July 14, 2015 and began implementing it on January 16, 2016.

Under the JCPOA, Iran undertook to put limitations on its nuclear program in exchange for the removal of nuclear-related sanctions imposed against Tehran.  The JCPOA is regarded as the most significant diplomatic success for the 28-nation bloc in several decades.