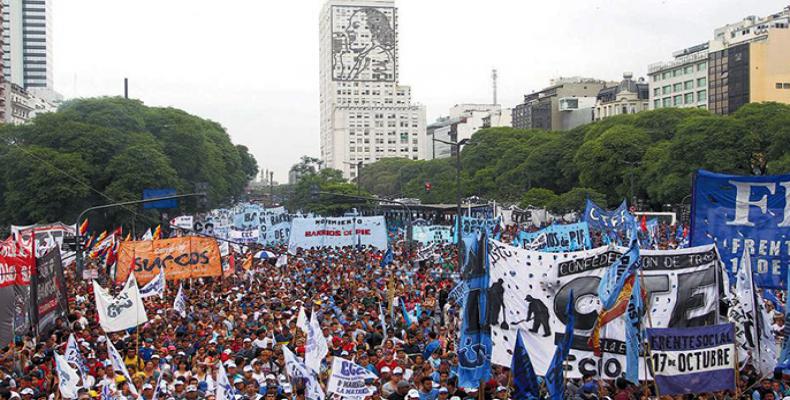 According to the Workers' Federation for a Popular Economy, CTEP, over 250,000 marched to the National Congress, braving blockades maintained by police and facing hundreds of heavily-armored crowd control officers who deployed water cannons and non-lethal weaponry to ward off protesters.

The demonstrators  were denouncing President Mauricio Macri´s pension reform that will reset the system for calculating pensions for around 17 million people. According to opposition figures, the government would save around 5.6 billion dollars by slashing the pensions.

Facing the tumultuous trading union reactions to the proposal, Macri has requested a vote on the Bill Thursday, and the General Workers Federation, after an emergency meeting,  has called for a 24-hour strike on Friday.

In 2008, the government of then-President Cristina Fernandez de Kirchner introduced reforms to the pension system that updated pensions semiannually while taking tax revenue and average wage increases into account. Critics say the new system, which takes into account tax revenues and inflation rates, will reduce allotments for pensioners.

"No need to do any sophisticated reasoning to realize that this affects the access to food rights of vulnerable groups because this pension is essential to the income of retirees. This is an elementary law of human rights," said constitutional lawyer Daniel Sabsay.

Carlos Bianco, a leader of the Argentine Workers' Central Union, accused the Macri government of serving the interests of multinational corporations and Argentina's ultra-rich.

"Sadly, the proposed agenda, supported by Macri's government, is an agenda that has nothing to do with development. It is an agenda for corporations," Bianco said.