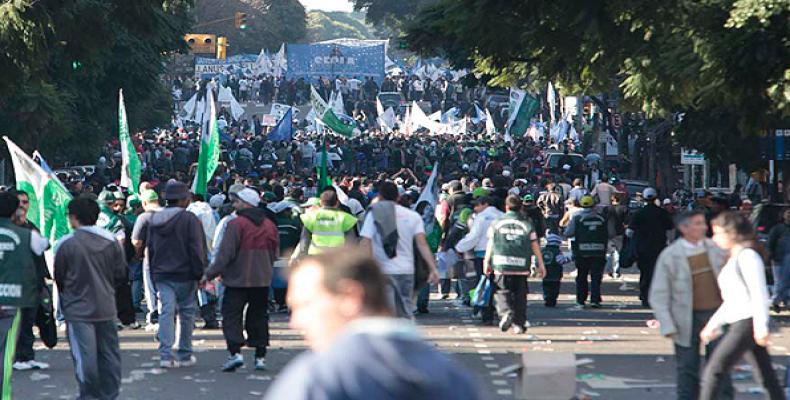 Buenos Aires, December 20 (RHC)-- Public transit operators in Argentina launched a one-day national strike Monday morning, grinding commuting in the capital city Buenos Aires to a halt to demand changes in the income tax system in the face of what labor unions have criticized as slow progress toward reforms to benefit workers.

Labor leader Pablo Moyano told Argentina’s C5N news that the response from workers joining the strike was “overwhelming,” and that those carrying out the work stoppage are “the most affected by the near-theft of the state through income taxes.”

The strike began at 4:00 a.m. local time across different modes of public transportation and continued up until 12:30 p.m. local time in some transport systems.  The suspension of services reportedly sparked chaos and heavy traffic in the capital city of nearly three million people and its surrounding areas.

Buses were off the roads between 5:00 and 7:00 a.m. local time, while subways, trains and flights from the two largest domestic airlines in the country, Aerolineas Argentinas and Austral faced major delays.  The strike also impacted garbage collection and the fuel delivery, among other services.  Taxi drivers, however, did not join the strike.

Unions warned ahead of time that the strike would impact “all modes of transport in the country” and that workers could opt to intensify job action if decision-makers continue to sideline their demands.

Labor leaders also held assemblies with workers Monday to share information about the status of negotiations with the government and debates in Congress, vowing to continue holding meetings and planning job action until authorities agree to make changes.

The unions are demanding income tax reforms that would benefit more than 1.5 million workers in the South American country. In particular, they are calling for holiday and overtime pay and travel expenses to not be including as taxable income.

The negotiations have already made progress toward an agreement on raising the minimum non-taxable income to allow more low-wage workers to benefit from the tax break.  According to Argentina’s La Nacion, a deal is expected to be struck for the level to be increased to between 35,000 and 38,000 Argentine pesos, or about $2,200 and $2,390 U$D.

Union leaders argue that the government of President Mauricio Macri, the Congress and other lawmakers are to blame for the strike as a result of a lack of commitment to reaching a satisfactory agreement promptly.

Interior Minister Rogelio Frigerio, on the other hand, claimed that the strike was “difficult to explain,” arguing that unions and officials are “in the middle of negotiations” and “close to resolving” the issues on the table, Argentina’s El Destape reported.

The strike comes after months of mass layoffs in the public and private sector and rising inflation since Macri took office last December have hit Argentina workers hard. At least 179,000 workers lost their jobs in the first six months of Macri’s administration, while leaked documents have indicated that more labor cuts are expected.

As inflation rises and purchasing power falls, poverty has also increased in the past year despite promises from Macri to usher in “zero poverty” to the South American country.