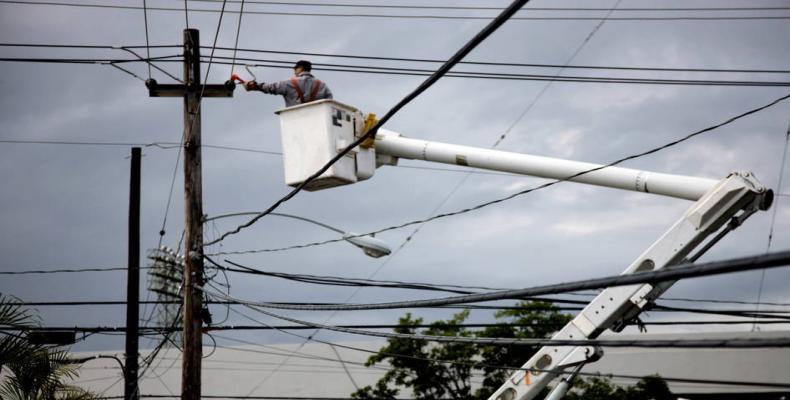 San Juan, December 16 (RHC)-- In Puerto Rico, community groups have called for nationwide actions against inadequate electrical services on the island in the wake of Hurricane Maria.  Residents of a neighborhood in Trujillo Alto have commemorated their 100th day without electricity with a birthday cake and a message to their government: "Christmas in this little town will receive Jesus in sadness, because the government has forgotten us and we continue without light."  Protests are set to take place in San Juan and Guaynabo.

Hurricane Irma struck Puerto Rico on September 8th.  A week later, Hurricane Maria made its way across the island.  Both decimated the island's electrical grid along with water infrastructure, internet connectivity and housing.  They also deepened ongoing economic and social issues related to austerity measures.

After Puerto Rico was hit by the hurricanes, Governor Ricardo Rossello promised that 95 percent of the Island would have electrical services restored by December 15th.  However, vast sections of the island remain without power.  The director of Technical Operations for the Electrical Energy Authority said the utility will be re-established between December and January of next year, depending on the availability of materials.

Puerto Rico remains a U.S. territory and Puerto Ricans are U.S. citizens.  However, the U.S. government's emergency response revealed the lower status granted to residents there.  As U.N. Special Rapporteur on the Right to Housing Leilani Farha put it: "We can’t fail to note the dissimilar urgency and priority given to the emergency response in Puerto Rico, compared to the U.S. states affected by hurricanes in recent months.”

The lack of adequate response garnered criticism at home and abroad, especially after U.S. President Donald Trump dismissed Puerto Rico's tragedy, comparing it with Hurricane Katrina's aftermath, which he called "a real catastrophe."