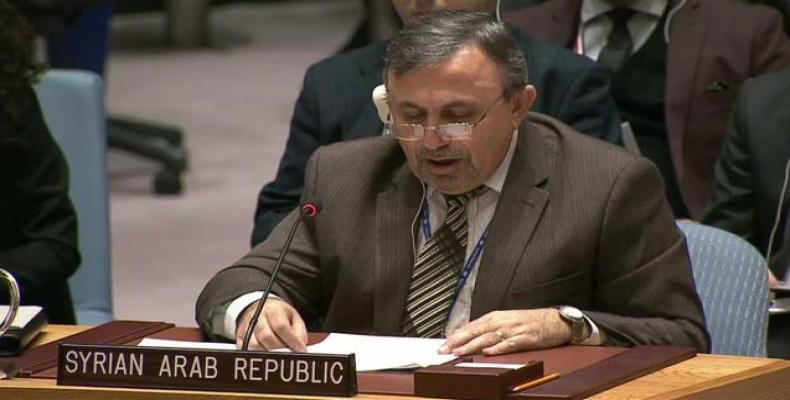 United Nations, February 7 (RHC)-- Syria has dismissed fresh accusations by the US and the UK about Damascus using of chemical weapons against militants and civilians in the country.  During a UN Security Council meeting, acting chargé d'affaires of the Syrian delegation at the UN, Munzer Munzer, rejected the U.S. claims as “false and cheap.”

The Syrian diplomat said the U.S. resorts to such “fabricated accusations” whenever it realizes that terrorist groups are in trouble in the face of any progress by the Syrian army.  He noted that the U.S., Britain and France bear full responsibility for obstructing an independent investigation into the use of chemical weapons by covering up crimes committed by terrorists in Syria.

The Security Council meeting was requested by Russia to discuss the use of chemical weapons, following a report on a poisonous gas attack in northwestern Syria.  At the UN session, the U.S. and Britain once again accused the Syrian government of using chemical weapons against civilians.  The two countries also accused Russia of obstructing investigation into chemical incidents in Syria.

Addressing the Council members, Russia’s Ambassador to the UN Vasily Alekseevich Nebenzya rejected any use of chemical weapons by Damascus and accused the Western media outlets of what he called “propagandistic campaign.”  Nebenzya said: “Recently, there has been all the fuss about the alleged use of chlorine in Damascus suburbs. There are even rumors about Sarin being used.  Where?  When?  By whom? What comes with this propagandistic campaign is nothing new."

The Russian ambassador also accused the U.S. and Britain of using the issue to sabotage Moscow’s efforts to find a political solution to the crisis in Syria.  “Today’s meeting is being used by the US and UK to slander the Russian Federation. We can see clearly why this is taking place. Some are concerned about the success of the Syrian national dialogue conference in Sochi. There are concerns about the prospect to breathe new life into the political process in Syria,” he noted.  Around 1,600 delegates representing a wide range of Syrian political factions attended the Sochi talks in late January. The event was boycotted by the High Negotiations Committee, which is based in and guided by Saudi Arabia.

Damascus welcomed the results of the event and stressed that its final statement affirmed that political progress in Syria cannot begin except under the Syrian leadership and without any foreign interference.