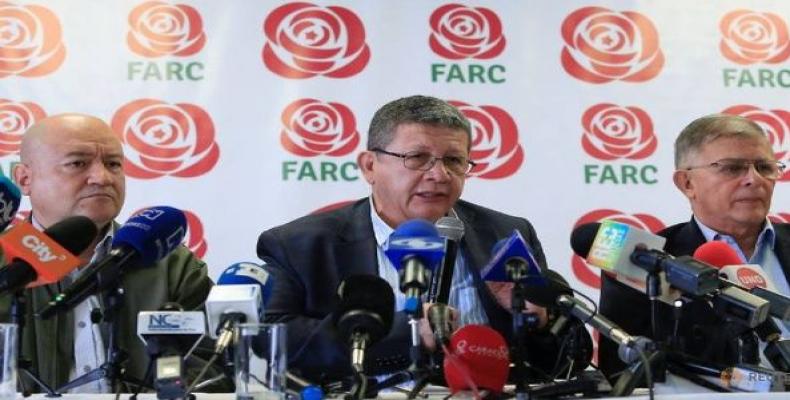 Bogota, May 30 (RHC)-- The Common Alternative Revolutionary Force (FARC), the political party founded after the demobilization of the insurgent group with the same acronym, has denounced the murder of three of its members between May 22 and 26 in rural areas in Cauca and the Cauca Valley, southeast Colombia.

The murdered members are Cristian Bellaizac, Jhon Jairo Ruiz Pillimue and Wilinton Bravo Angulo in the Jamundi, Suarez and Buenos Aires municipalities, respectively.  According to the party, who said 24 former fighters were killed in the first five months of the year, political forces in the country must “seriously commit to walking together on the path for reconciliation and coexistence.”

They invited Álvaro Uribe's protege Ivan Duque and progressive candidate Gustavo Petro, who will face each other in the second round of the presidential elections on June 17, to “wrap up once and for all that great national political agreement to abolish the use of weapons in politics.”  The political party showed its concern for crimes related to drug cartels in Colombia and the violation of human rights that “directly threaten peace and social leadership in these territories.”

Last Wednesday, the FARC denounced that “criminal groups, successors of paramilitarism... threaten and harass” their members in Bogota.  A day before, President Juan Manuel Santos said that 40 members of the former insurgent group had been killed since the peace agreement was signed between them and the Colombian government, but the leftist political party claims the number of victims is higher at 60.

“Just one is too many,” said Santos, recognizing the government has failed to protect the former fighters and to comply with the agreement and assured his administration would continue to work until the last of its days so “more cases don't occur.”

Even though the peace agreement with the FARC aimed at ending a decades-long armed conflict to combat violence in the country, the permanent presence of paramilitary groups -some even working under government's protection- is hampering peace efforts in the region with impunity.

In fact, the demobilization of the former guerrilla fighters left a void of power in many regions, which have been now taken by violent drug cartels and paramilitary groups.  More than 200 social leaders and human rights defenders have been murdered in Colombia since January 2017 to date. Multiple human rights organizations have urged the Colombian government to implement more effective measures to preserve the lives of social leaders.

In January, the Gaitanist Self-Defense Forces of Colombia, or AGC, the armed forces branch of the “Clan del Golfo” (Gulf Clan), threw a grenade into an Antioquia dance club, injuring 30 people and breaking the unilateral ceasefire they had announced for the Christmas celebrations.

The organization emerged in 2007, as a result of the 2005 demobilization of paramilitary groups then known as the United Self-Defenses Forces of Colombia, leaving a void in the drug trafficking and extortion business.  The group is also known as "Los Urabeños," a nickname given by the Colombian government.

While the Colombian government continues to deny the existence of other paramilitary groups, the brutal organizations continue to cause internal disturbances and kill human rights defenders.  Colombia’s landmark peace deal with the Revolutionary Armed Forces of Colombia that was widely hailed as an end to the longest-running civil war has done little to stop paramilitary violence.