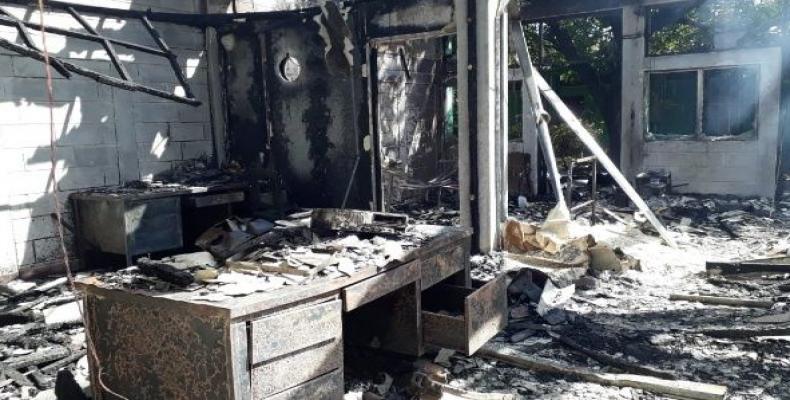 Managua, June 4 (RHC)-- In Nicaragua, a group of opposition supporters set fire to series of government buildings in the city of Leon, located northwest of Managua.  The German Pomares Complex of government offices in Leon, which provides the City's over 200,000 citizens with social and financial services, was almost completely destroyed in the blaze.

The complex also housed the ministries of Family Economics, Agriculture and Livestock, Environment and Natural Resources, National Forests and Property Management unit among other institutions.

“As it is now known to the Nicaraguan people, a group of vandals in a so-called peaceful struggle, with a barricade preventing free transit of families, has carried another act vandalism by setting on fire a building known in the city,” said Evertz Delgadillo, Political Secretary of Leon City, who added that about 70 people participated in the attack.

Quick action by the local fire department helped them control the blaze and save parts of the structure.  “We managed to cut the dissemination channels, neutralizing the fire and extinguishing the flames. Now we're working on cleaning duties to avoid more heat sources, so the flames don't come back. The Magfor and the Inafor [National Forests Institute] were totally burned, but the rest of the offices were saved,” said Ramon Landero, the Director of the Firefighter's General Management, Friday.

Edward Centeno, the agriculture and livestock minister, said the offices of Agriculture and Livestock Ministry (Magfor) had been destroyed “by groups that only want to bring instability and violence to families, taking us away the peace Nicaraguans used to enjoy,” and urged Nicaraguan people to pray for peace since they “don't deserve what's happening.”

Sumaya Castillo, director of Inafor, also expressed regret formally the attack on the offices and called again for peace.  “From our institution, we have carried a great effort that was affected today due to the fire, in which we've lost a great part of documents about of collaborating partners who have helped us in the reforestation in the west and that have substantially contributed to reforestation programs,” Castillo said.

The Vice President of Nicaragua, Rosario Murillo, recently commented about a letter Pope Francis sent to President Daniel Ortega, in which he called for dialogue as the only way of reaching peace and rejected the violent tendencies of some sectors of society.

“It's never late for forgiveness and reconciliation.  I pray to find the route for justice, dialogue, and peace that lead to a climate of coexistence and respect for each and every Nicaraguan's life so that issues can be solved peacefully and responsibly,” wrote Pope Francis in the letter dated May 11th.

Protests have been ongoing since April.  Initially led by students against changes to social security, they have since shifted to calling for the removal of Daniel Ortega's Sandinista government, and have been dominated by violent, armed groups blockading highways and attacking public buildings.