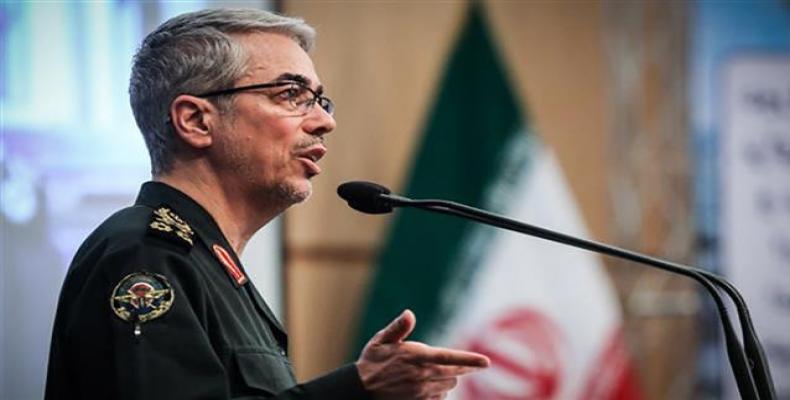 Tehran, June 4 (RHC)-- The Chief of Staff of the Iranian Armed Forces Major General Mohammad Baqeri says any threat or possible act of aggression by enemies will be met with a firm and crushing response.

Baqeri made the remarks in a message issued on Saturday on the occasion of the 29th anniversary of the passing away of the founder of the Islamic Republic, Imam Khomeini, and pro-Palestinian International Quds Day, falling on the last Friday of the fasting month of Ramadan.

He said the Iranian Armed Forces would not hesitate even a moment to give a “firm and crushing response” to any threat, act of aggression or a greedy move by enemies of the country.  He emphasized that the Islamic Revolution was a new element in the global equation of power.

The top military commander added that Iran's very powerful influence in the region, acknowledged by friends and foes, was rooted in important and key factors such as the "strategic and far-sighted management" of the Leader of the Islamic Revolution Ayatollah Seyyed Ali Khamenei and "prudence and wisdom" of the Iranian nation.

Baqeri said that Iran had managed to overcome major regional challenges such as war and insecurity, spread of Takfiri terrorism and threats posed by the US, Britain and the Israeli regime as well as reactionary Arab countries of the region.

In the domestic arena, he added, the Islamic Republic had also succeeded in thwarting the "enemy's complicated and deceitful plots."  He emphasized that the Iranian forces in the Army, the Islamic Revolution Guards Corps (IRGC), police and Defense Ministry would make use of their utmost capabilities to "safeguard the independence, territorial integrity and national sovereignty" of the Islamic Republic.

The military chief further said this year's International Quds Day was very important due to its coincidence with the US relocation of its embassy in Israel from Tel Aviv to Jerusalem and the Israeli regime's massacre of the Palestinian people in the Gaza Strip.