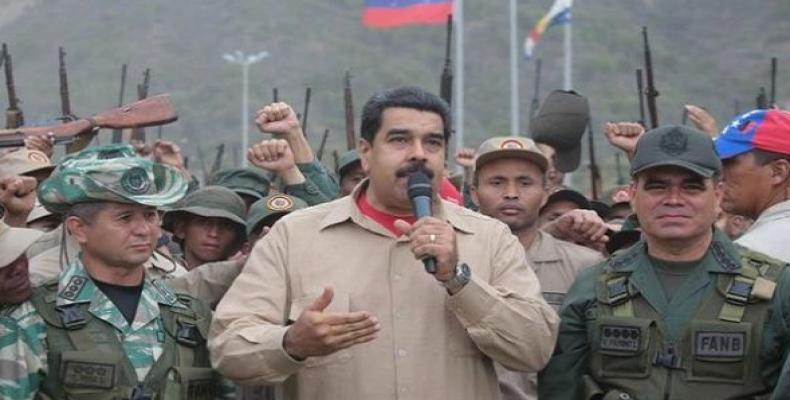 Caracas, August 7 (RHC)-- President Nicolas Maduro told the Venezuelan public that the Bolivarian National Armed Forces, the FANB, had firmly responded to a paramilitary-style terrorist attack carried out this Sunday against Fort Paramacay in the central state of Carabobo.

In a televised address, Maduro said: "It is a terrorist attack against the Bolivarian National Armed Forces and the Armed Forces has reacted in a united way, with morality, with decisiveness."  The Venezuelan president reported that among the anti-government group, two were killed and seven arrested.

In a communique, the military explained that there had been an attack on the 41st Armored Brigade, which was led by a group made up of "civilian delinquents in military uniforms and a first lieutenant who had deserted," adding that "the terrorist operation was repelled and arrests made, including the first lieutenant."

The statement said that "the terrorist operation included the release of a video by a junior official that over three years ago was removed from the armed forces, accused of treason and rebellion, who then fled the country and received protection in Miami, United States."

According to ruling United Socialist Party of Venezuela leader and Constituent Assembly member Diosdado Cabello, there was "absolute normalcy in the rest of the military units of the country," emphasizing that anyone who dreamt otherwise would have to deal with the morality of the Bolivarian military.

The Venezuelan armed forces said that those captured have "confessed to having been contracted by the states of Zulia, Lara and Yaracuy by far-right Venezuelan activists in connection with foreign governments."

"Today's terrorist attack is nothing but a propaganda show, a pipedream, a desperate move that is part of destabilization and conspiracy plans," the statement added.

"The FANB (Bolivarian National Armed Forces) remains strong, united in its democratic convictions with high morale; and supports unconditionally citizen Nicolas Maduro Moros, constitutional president of the Bolivarian Republic of Venezuela and our commander in chief, as well as his constituent initiative and the Bolivarian Revolution as a project that seeks to consolidate the homeland, free, sovereign and independent," the statement concluded, calling for all women and men to unite to build a country based on "justice, cooperation and understanding."

Defense Minister Vladimir Padrino Lopez also tweeted early in the morning: "They could not deal with the FANB, with their morale nor with their constitutional conscience, so now (they) intend to attack it with terrorist attacks. They won't be able to!!!"

Since April, Venezuela has seen opposition forces organize violent protests — leading to over 100 deaths and thousands of injuries — in their attempts to oust democratically-elected President Nicolas Maduro.

Venezuelans officials, including Maduro, have accused the right-wing of working closely with international players like the United States to destabilize the country to induce external interference and military intervention.