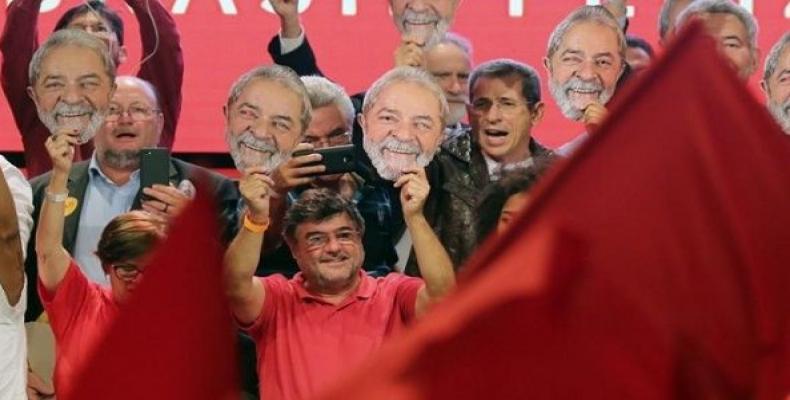 Brasilia, June 11 (RHC)-- Thousands of supporters reunited for a vigil outside the prison cell of Brazil's ex-President Luiz Inacio Lula da Silva after the Workers' Party officially announced his candidacy for president over the weekend and as he maintains his wide lead in a recent presidential poll issued Sunday.

People met near his cell outside the local Federal Police offices in Curitiba, where he has been held since April 7, and chanted slogans in support of Lula during the night, just hours after his candidacy was officially announced in another city.

A thousand kilometers south, in Contagem, Minas Gerais, his successor Dilma Rousseff read a letter sent by Lula to the Brazilian people in which he affirms he will continue “until the last of consequences.”

Lula da Silva wrote: “When it was obvious they would get me by force, without crime nor evidence, I decided to remain in Brazil and face my executioners. I know my place in history and I know which is the place reserved for those who are prosecuting me. I'm sure justice will make truth prevail.”

In the letter, the ex-president promised to save Petrobras, the state's oil company, from the privatization process imposed by the new government and Wall Street's speculations. He also pledged to protect other state-owned companies that are now in danger of privatization.

The former president said that going across the country during his most recent caravan he saw “the hope in people's eyes” and the “anguish of those suffering from hunger, unemployment, malnutrition, school retention, the stolen workers' rights, the destruction of constitutionally guaranteed social inclusion policies that are now denied in practice,”

That's why, he says, he is running for president again, because he dreams of a country “in which everyone can have three meals a day, in which children can go to school, in which everyone has the right to work with a decent salary and law protection. A country in which every rural worker can have access to land again in order to produce.”

He also denounced those who accused and sentenced him over corruption charges, which he denies. “I was never the owner, I was never in possession, I never spent a night in the Guaruja apartment. Those who sentenced me, Sergio Moro and the TRF-4 prosecutors, know they made up a legal sham to arrest me, since I proved my innocence in the process and they didn't have evidence for the crime I'm being accused of,” he said.

Despite being in prison, Lula da Silva remains the front-runner in all opinion polls with around 30 percent of the vote intention. According to a Sunday poll by Datafolha, Lula has 31 percent of support among Brazilians, ahead of the “no preference” option, with 21 percent. In third place comes the far-right wing Jair Bolsonaro.

President Michel Temer has become Brazil's most unpopular president on record and 92 percent of voters surveyed said they would reject the candidate he backs, Datafolha said. Temer's pick is former Finance Minister Henrique Meirelles, who has not been able to breach 1 percent of voter support in the polls.

Datafolha surveyed 2,824 voters across Brazil between June 6-7. The poll has a margin of error of 2 percentage points.