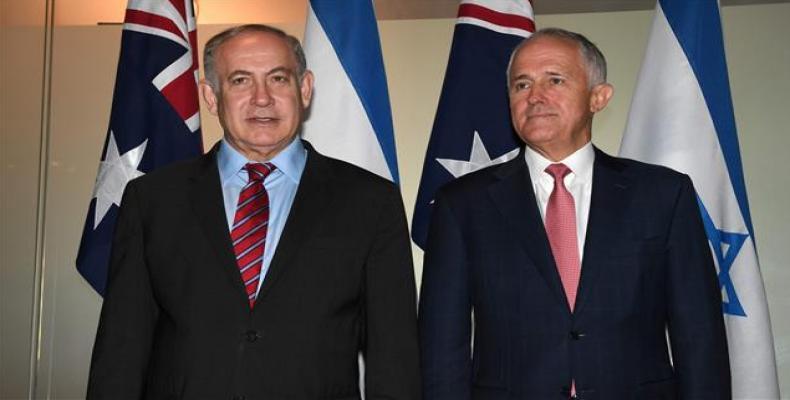 Sydney, February 25 (RHC)-- Israeli Prime Minister Benjamin Netanyahu says the Tel Aviv regime will never end its decades-long occupation of Syria's Golan Heights.  During a meeting with his Australian counterpart, Malcolm Turnbull, Nethanyahu said: "I want all of you to come to Israel." I want you to walk the streets of the Old City in Jerusalem, hike in the Golan Heights.  By the way, the Golan will never go back to Syria.  It will always be a part of Israel."

The remarks came on the same day that about 1,000 protesters gathered at Sydney's Town Hall, to express their outrage at the Australian government's warm reception of the Israeli prime minister.  "He's responsible for settlement expansion which is illegal under international law, he's responsible for a lot of the wars that have been committed against the Palestinians in Gaza, and really this man should be tried in the ICC (International Criminal Court), not welcomed down in Sydney," protester Mona Abuzalaf said.

Another protester, Randa Abdel-Fattah, wanted to remind Netanyahu that Palestinians had supporters.  She told reporters; "We will not give up. We are a resilient people and our resistance will continue until we are given restitution and our human rights."

Last November, the United Nations General Assembly passed a resolution calling on Israel to withdraw from the Golan Heights, which it has occupied since 1967.  The resolution also condemned Israel's non-compliance with Security Council Resolution 497 since 1981, describing as null and void Tel Aviv's decision issued on December 14, 1981 to impose its control over the occupied Golan Heights.