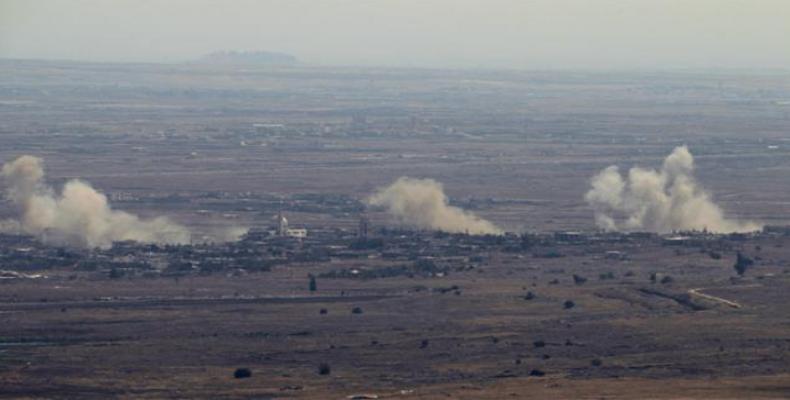 Tel Aviv, September 12 (RHC)-- Israeli military aircraft have launched yet more strikes on the Golan Heights in southwest Syria.  The Israeli military said Saturday that "artillery positions" were hit in Golan after "a projectile" coming from Syria hit the Israeli-occupied part of the territory.

Similar attacks had been carried out against Syrian military positions earlier under the same pretext.  Attacks had also been carried out in July and before.  An Israeli military spokeswoman said the firing of projectile from Syrian-controlled Golan was most likely unintentional, calling it "spillover" from the fighting in the Arab country.

Golan belongs to Syria, and Israel's occupation of around 1,200 square kilometers (460 square miles) of the territory during the 1967 Six-Day War and its later annexation have never been recognized by the international community.

Tens of illegal settlements have been built in the area over the years while the regime in Tel Aviv has used the area to launch attacks against the Syrian government and its allies.

Such attacks have intensified over the past years as groups like Lebanese resistance movement Hezbollah, which have a history of fighting against Israel, have become more active in Syria to assist Damascus in the fight against terrorists.  Despite official statements claiming that Israel has remained on the sidelines of the war in Syria, there have been numerous reports that Israel is offering weapons and medical care to terrorists through Golan.

Reports say most of these arms and assistance are delivered to groups like Nusra Front, an offshoot of al-Qaeda which recently changed its name to Jabhat Fateh al-Sham.

Syria's state television said later that an army outpost was targeted in the Israeli raid on Saturday. A Syrian military source said the attack was meant to help the militants in their offensive against the government near Golan.