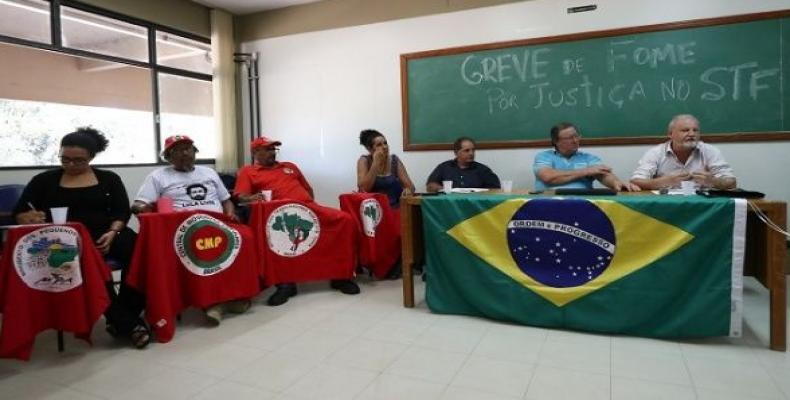 Brasilia, August 1 (RHC)-- Members of social movements from different states of Brazil are on a hunger strike to protest the imprisonment of former President Luiz Inacio Lula da Silva and rising poverty in their country.

At a press conference in the Brazilian capital, Joao Pedro Stedile from the Rural Landless Movement (MST) said: "As an extreme act for the resumption of democracy and freedom of former president Lula and to denounce the return of poverty in Brazil, militants of the social movements of several Brazilian states have joined in Brasilia on a hunger strike, for an indefinite period," stated the Workers Party (PT).

This measure has been called for by the Via Campesina (Campesino Way), as an extreme act of pressure on the government.  Six militants from different social movements began the hunger strike and will be supervised by a doctor in order avoid risks to their health.

"We are entering a hunger strike that is open-ended... without a date to end.  In the name of all our social movements, I want to thank all of you (the 6 militants starting the hunger strike) for your generosity and your high militant spirit, that is requesting from you the highest level sacrifice," said Stedile during the press conference.

"The establishment of the coup d'état, the breaking of democracy and the dismantling of public policies by the coup government, which cause the return of misery and hunger to the Brazilian people, are determining factors for the decision," stated the PT in an explanation for the decision to carry out a hunger strike.