In spite of blockade, hostility and efforts at regime change, Cuban Revolution alive, strong and faithful to its principles, says President Diaz-Canel 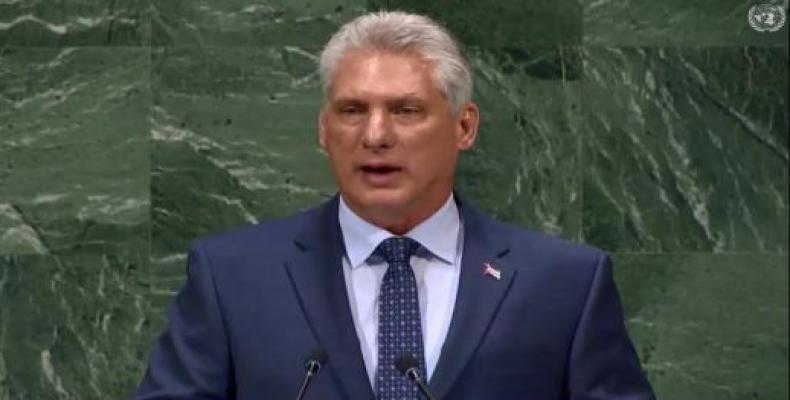 President Díaz-Canel recalled that other outstanding Cubans figures, like Ernesto Che Guevara, Raúl Castro and Raúl Roa, had also addressed the world from that rostrum.

Turning to the situation on the planet, the Cuban head of state noted that 3,4 billion human beings currently live in poverty, a reality, he said, that is not the result of socialism, as affirmed by US President Donald Trump, but which is a consequence of imperialism and greed.

He noted that capitalism generated colonialism and is opposed to solidarity and democratic participation. Capitalism promotes plundering and threatens peace--he said--it constitutes the greatest danger for the equilibirum of the planet.

Diaz-Canel said that there is no political will on the part of industrial nations to solve the most pressing global problems, like climate change, which he called "another unavoidable reality and a matter of survival, because some of its effects are already irreversible."

However, he said, the United States, one of the most polluting countries, refuses to accompany the international community in complying with the Paris Agreement on climate change..

Turning to Cuba, President Diaz-Canel said that despite the US blockade, the hostility and the actions carried out by the United States to impose regime change on the island, the Cuban Revolution remains alive, strong, faithful to its principles.

On behalf of the Cuban people, he thanked the General Assembly for its almost unanimous rejection of the economic, commercial and financial blockade imposed by the United States against Cuba.

"Cuba maintains its willingness to have a respectful and civilized relationship with the government of the United States, based on sovereign equality and mutual respect, which is the will of the Cuban people and we know that it is a shared aspiration of most American citizens and especially Cuban citizens living in the US," said Diaz-Canel.

He stressed that "we will continue to relentless demand the end of the cruel economic, commercial and financial blockade, the return of the territory occupied by the illegal base of Guantanamo and the just compensation to our people for the thousands of dead and mutilated, as well as the economic damage caused during so many years of US aggression.