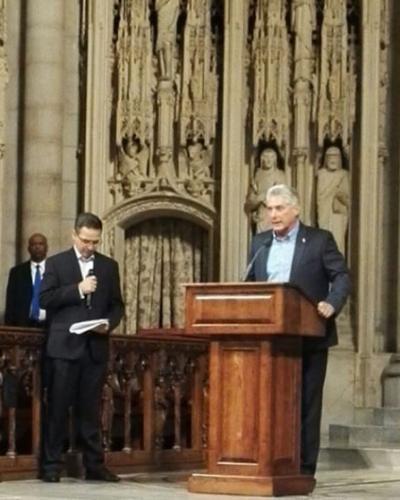 Addressing some 2,000 participants, Diaz-Canel pointed out that at United Nations on Wednesday two brother peoples raised their voices.  Venezuela denounced all the aggressions it has been subjected to and also ratified its decision to continue the Bolivarian revolution, and to be faithful to the legacy of Hugo Chavez.

The Cuban president thanked participants at the event for their warm welcome and expressed his appreciation to friends of Cuba and Venezuela in New York.  “In this city, miracles like these only happen here, in the Riverside Church,” and he described it as cathedral of faith and solidarity.

'Cuba also owes a lot to international solidarity and to the help of many friends and activists here in the United States, among whom there are many Cubans residing here.'

The event was organized by Cuba solidarity organizations in the United States, and was attended by former U.S. congressman and long-time friend of Cuba, Charles Rangel.