Syria's foreign minister says only Syrians can determine their own future 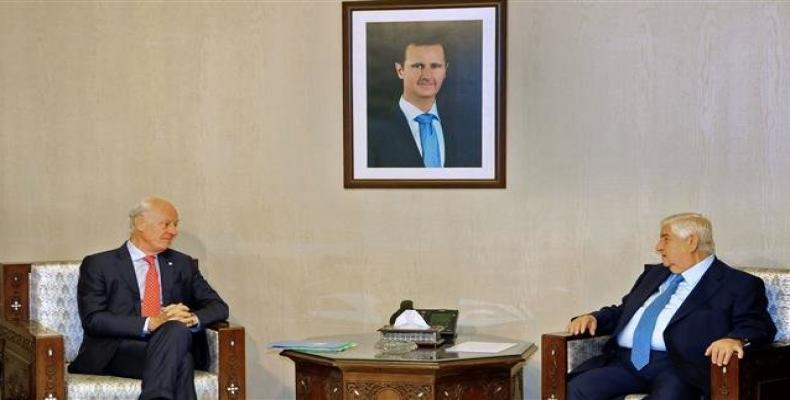 Damascus, October 25 (RHC)-- Syrian Foreign Minister Walid al-Muallem told the United Nations special envoy that the nation’s constitution is a matter of sovereignty that can only be decided by the Syrian people.  Muallem made the remarks during a meeting with UN Special Envoy for Syria Staffan de Mistura in the capital Damascus on Wednesday.

Syria’s top diplomat also accused some states of seeking to interfere and impose their will on the Syrian people.  "This entire process must be under Syrian leadership and ownership.  The constitution, and everything related to it, is purely a matter of sovereignty that will be decided without any foreign interference," he told de Mistura, according to SANA, Syria's official news agency.

SANA said de Mistura and Muallem discussed the envoy's efforts to "activate the political process and form a committee to discuss the constitution."    De Mistura, for his part, said he has done his best to reach a political solution to the crisis in Syria.  "We had a very frank and very intense exchange of opinions concerning the constitutional committee and the political process in general," the envoy said after the meeting.  The envoy traveled to Damascus at the invitation of Syrian authorities and would stay for a "couple of days", according to the United Nations.

Earlier this year, Moscow invited representatives of Syria's government and armed opposition groups to the Russian resort town of Sochi and proposed creating a committee to revise the constitution.   De Mistura had hoped the committee would be ready before the fall, but agreeing on its makeup has taken longer than expected.

The committee is expected to include 150 members: 50 chosen by Damascus, 50 by the opposition and the final 50 by de Mistura. It will also include civil society representatives, religious and tribal leaders, experts and women.

The regime has also insisted the body would simply "discuss" the current constitution while opposition groups seek deeper changes.
Following a round of talks in Geneva, Russia says the three guarantor states of the Syria peace process have reached a consensus with the United Nations on candidates for the country’s constitutional committee.

Alexander Lavrentyev, the Russian president’s Special Representative for Syria, told reporters in the Swiss city of Geneva on September 12 that representatives of Iran, Russia and Turkey had met the UN envoy and “agreed in principal” on the two lists of candidates for Syria’s constitutional body.

In early September, Iran’s President Hassan Rouhani hosted his Russian and Turkish counterparts for a trilateral summit on Syria.

In a joint statement, the participants at the Tehran summit said the Syria crisis could only be resolved through a negotiated political process, and has no military solution.