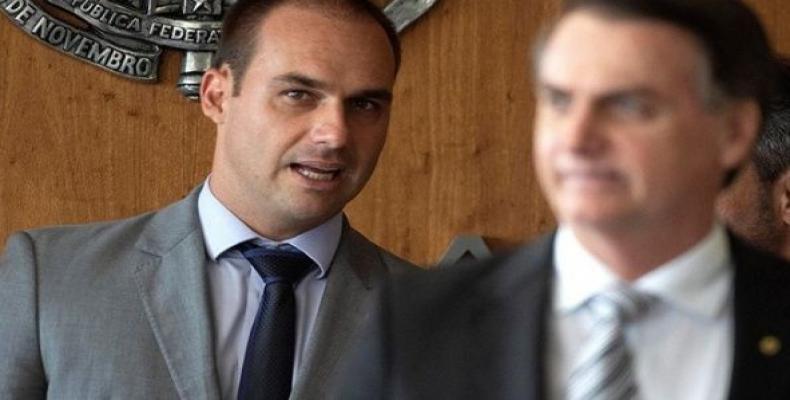 Brasilia, November 15 (RHC)-- In Brasilia, listing the bills he will submit as a lawmaker, the son of Brazil’s President-elect Jair Bolsonaro, Eduardo, said he will not hesitate to criminalize social movements like the Landless Workers' Movement (MST) and ban opposition political parties “if necessary.”

“What’s going on now is that groups such as the Landless Workers' Movement sometimes use their criminal power in order to invade lands, set tractors on fire in order to force the ranchers to sell their lands below market price," the far-right lawmaker said in an interview with the daily Estadao.  "They impose terror in order to obtain benefits.  This is what people are trying to fight against."

Denying the realities of thousands of campesinos struggling to survive in one of the most unequal countries in terms of land distribution, Bolsonaro insisted his job in Congress will consist in "making their lives harder."

“If arresting 100,000 people was a necessity, what is wrong with that?  Rather I find it problematic to be leaving a hundred thousand people with this kind of stance, believing that land invasion is normal, feeling they are free to commit such crimes.  This is my main fear. I want to make life harder for these people,” he said.

“One of the legislators’ roles consists in raising awareness among people. They have unusual duties.  And they have to use their position as representatives of a part of society to speak out on the dangers of Communism, just like prostate cancer.”

He added that he was in favor of a foreign intervention in Venezuela because “on top of Communism, there is also Hezbollah and drug trafficking.”

Eduardo's father was elected president despite being an open supporter of Brazil's dictatorship from 1964 to 1985, which was responsible for arbitrary arrests, torture, murder and forced disappearances.

As a legislator, Bolsonaro dedicated his vote in favor of impeaching democratically-elected president Dilma Rousseff to dictatorship-era Colonel Carlos Brilhante, "the terror of Dilma Rousseff."  Brilhante was convicted of torture and ran the detention center where Dilma was tortured in her youth.

Brazil's new president also said the dictatorship's mistake was to torture people and not kill them, and has spoken against LGBTI groups, women and Afro-Brazilians.