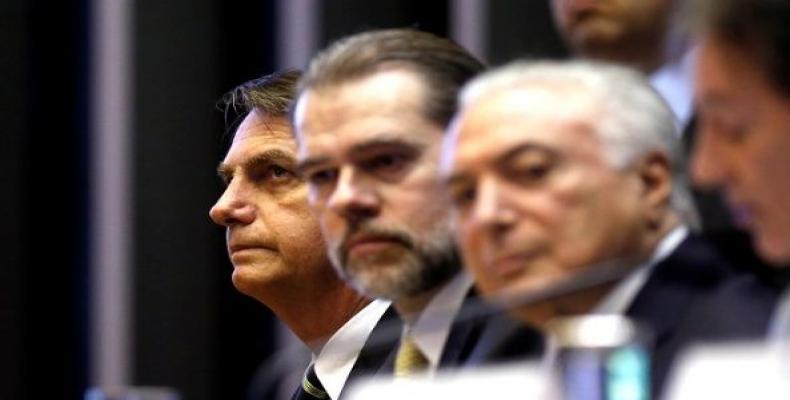 Brasilia, November 8 (RHC)-- Brazilian far-right president-elect Jair Bolsonaro has announced the names of his transition team and to no one's surprise, it completely excludes women and Afro-Brazilians from it.

The media and opposition groups didn’t hesitate in criticizing the choices of Bolsonaro, himself a retired military officer, which include seven military officers and the vice-president of the Social Liberal Party (PSL) Julian Lemos, who was accused of domestic violence by his ex-wife in 2013 and by his sister in 2016.

When asked about the total absence of women in the transition team and if there would be any taking over the future ministries, Bolsonaro gave a controversial answer that hints about the future of Brazilian politics.

“Are you going to ask me if there will be a homosexual [as minister]?  I don’t know” said the president-elect.  “I won’t take out someone to put a woman instead.”

In a country where the majority of the population is of African heritage and Dilma Rousseff was democratically elected president in 2014, the new direction taken by Bolsonaro and the PSL represent a dramatically different approach.

“We won’t pretend and we don’t want a government like the previous ones,” said Bolsonaro.   The media notes that Michel Temer’s team, who reached the presidency by a legislative coup and leaves office with record low approval ratings, had a similar composition, completely lacking women and Afro-Brazilians.

Bolsonaro is currently in Brasilia holding meetings with political, military and judicial authorities in order to set up the transition period.  His government will succeed Temer’s on January 1st.

His team allegedly plans to cut the number of ministries by half by combining some of them, facing criticism coming from all directions.  He already backtracked on fusing the agriculture and environmental ministries.

“We had an idea to combine the ministries but it seems both will remain separate, with one person focusing on environmental protection,” he said during an interview with Catholic TV stations.

The Brazilian president-elect has named few of his future ministers but he has already announced that the Chicago Boys-inspired Paulo Guedes will be in charge of the economy.