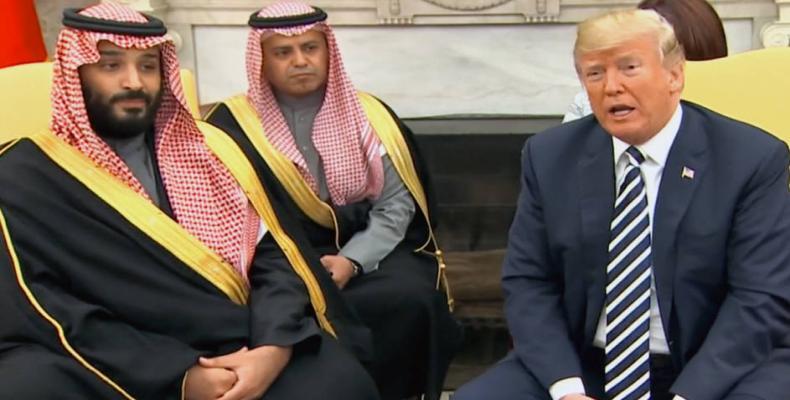 Washington, November 22 (RHC)-- U.S. President Donald Trump has said he would stand by Saudi Arabia over the murder of journalist Jamal Khashoggi, who entered the Saudi Consulate in Istanbul, Turkey, on October 2 and was never seen again.

In an extraordinary written statement riddled with exclamation points and subtitled “America First,” Trump wrote: “It could very well be that the crown prince had knowledge of this tragic event — maybe he did and maybe he didn’t!  That being said, we may never know all of the facts surrounding the murder of Mr. Jamal Khashoggi. In any case, our relationship is with the Kingdom of Saudi Arabia.”

The U.S. president was asked by reporters why he was siding with Saudi Arabia over his own intelligence agencies.  Trump said: “Saudi Arabia, if we broke with them, I think your oil prices would go through the roof. I’ve kept them down.  I’m about 'Make America Great Again,' and I’m about 'America First.'”

Trump went on to falsely claim that Saudi Arabia was investing over $400 billion in the U.S. economy while funding hundreds of thousands of jobs.  But a new report from the Center for International Policy found investment from Riyadh is responsible for less than 20,000 U.S. jobs a year and just a fraction of the investment cited by Trump.

Trump’s defense of the murder of Jamal Khashoggi drew condemnation from members of Congress. Virginia Democratic Senator Tim Kaine called the statement “yet another fawning prostration to a foreign authoritarian.” Some Republicans, including Senators Lindsey Graham and Rand Paul, have joined calls for new sanctions on the Saudi royal family.