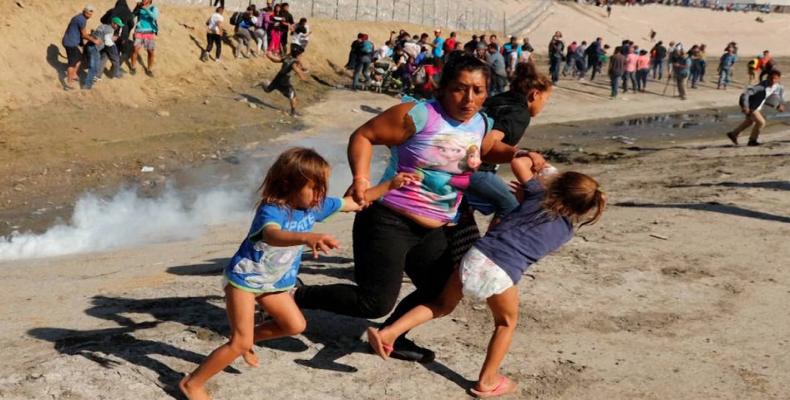 Washington, November 27 (RHC)-- U.S. President Donald Trump has called for Mexico to deport Central American asylum-seekers, a day after U.S. border patrol officers fired tear gas on a group of migrants in Tijuana as they attempted to cross the heavily militarized border near San Diego.

On Monday, Trump tweeted: “Mexico should move the flag waving Migrants, many of whom are stone cold criminals, back to their countries.  Do it by plane, do it by bus, do it anyway you want, but they are NOT coming into the U.S.A. We will close the Border permanently if need be.  Congress, fund the WALL!”

Mexico has asked the U.S. to investigate the use of tear gas on children. Speaking from Mississippi Monday, Trump defended the tear gassing for a second time and placed the blame on parents of migrant children, suggesting that some people with children aren’t guardians but so-called “grabbers” who simply use the children to gain asylum.

President Trump: “Why is a parent running up into an area where they know the tear gas is forming, and they know it’s going to be formed -- and they’re running up with the child?  And in some cases, you know, they’re not the parents.  These are people -- they call them grabbers; they grab a child because they think they’re gonna have a certain status by having a child. You know, you have certain advantages in terms of our crazy laws.”

An estimated 5,000 migrants are currently in Tijuana hoping to apply for asylum in the United States.  One of them is Maria Meza, a 39-year-old Honduran woman.  A Reuters photograph that went viral shows Maria rushing her two young daughters to safety Sunday as a cloud of tear gas spreads nearby.