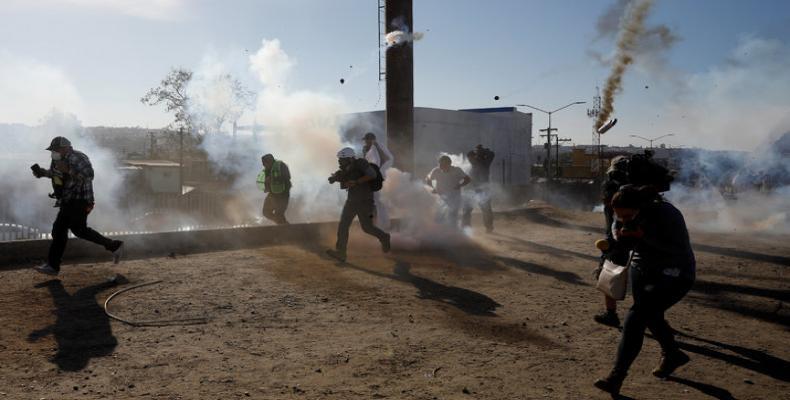 Tijuana, November 26 (RHC)-- In Tijuana, Mexico, U.S. border patrol officers fired tear gas Sunday into a crowd of desperate Central American asylum seekers as they tried to push their way through the heavily militarized border with the United States.  Among those attacked were mothers and small children, who were left gagging and screaming as tear gas spread.

Mexican federal police officers in riot gear moved in and arrested dozens of the migrants; Mexico’s government says they’ll be deported to Central America.  The group had broken away from a peaceful protest of thousands of migrants demanding entry to the U.S. where they hoped to gain asylum.

The migrants are from Honduras, Guatemala and El Salvador, and are fleeing widespread violence, poverty and mass unemployment.  The first wave of caravanistas reached the U.S. southern border in recent days.  In response, the Donald Trump administration temporarily closed the San Ysidro border crossing, one of the busiest ports of entry in the world, with more than 90,000 people crossing each day.

Meanwhile, the administration of Mexican President-elect Andrés Manuel López Obrador denied it had made any deal with the Trump administration to force asylum seekers to remain in Mexico while their U.S. asylum claims are processed.  The denial contradicts tweets by President Trump and a report in the Washington Post on Saturday.