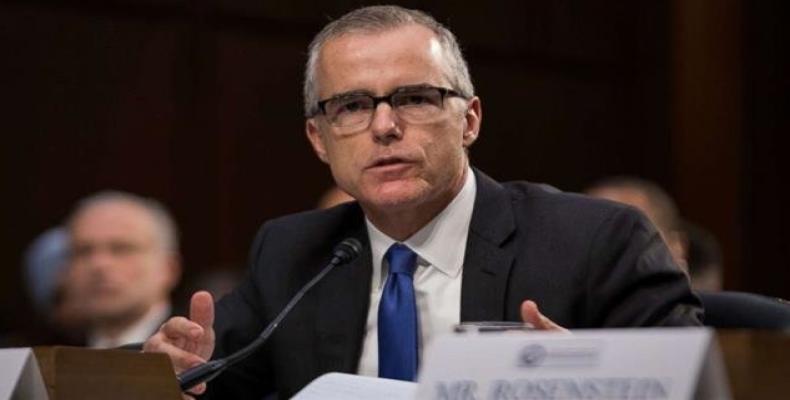 Washington, February 15 (RHC)-- U.S. Justice Department officials were so concerned about President Donald Trump's fitness for office in May 2017 that they discussed whether Trump could be removed from office, according to former FBI Deputy Director Andrew McCabe.

McCabe said worried that investigations into Trump’s alleged ties to Russia and possible obstruction of justice would be shut down after Trump fired Comey.  He said he was greatly alarmed by the possibility that the president “might have won the White House with the aid of the government of Russia.”

“I was very concerned that I was able to put the Russia case on absolutely solid ground, in an indelible fashion,” McCabe said. “That were I removed quickly, or reassigned or fired, that the case could not be closed or vanish in the night without a trace.”

McCabe was fired from the FBI last year by then-U.S. Attorney General Jeff Sessions after the Justice Department inspector general concluded that he had lied during an internal investigation into a news media disclosure.  McCabe has denied the allegations and has blasted his firing as part of the Trump administration’s “war on the FBI” and Special Counsel Robert Mueller’s ongoing investigation.