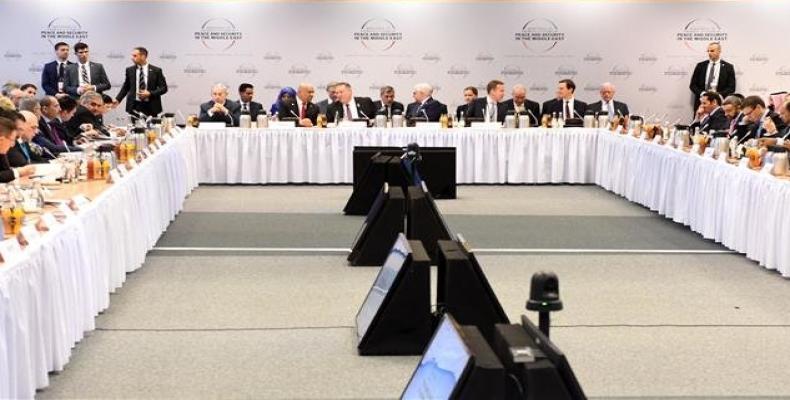 Damascus, February 18 (RHC)-- The Warsaw Conference, organized by the U.S. in the Polish capital on last week, has outraged observers in the Arab world who believe their leaders attended the conference merely as “extras” in a pre-planned scenario for normalization of Israeli-Arab ties.

In an editorial piece, Abdel Bari Atwan, the editor-in-chief of Rai al-Youm news and opinion website, said Israeli Prime Minister Benjamin Netanyahu was the “groom” at the Warsaw conference, and the foreign ministers of Arab countries were “extras” summoned by the U.S. to help normalize Arab ties with the Israeli regime.

While European officials, the main allies of the U.S. in the NATO, had either boycotted the conference or sent low-ranking officials to Warsaw, the Persian Gulf Arab foreign ministers decided to join the new “Warsaw Treaty,” led by the U.S. and Israel, for a war against Iran, said the senior Palestinian commentator, describing it as a humiliation for the Arab world.

“It was painful to see the foreign minister of the former government of Yemen, Khaled al-Yamani, sitting next to Netanyahu and exchanging smiles with him,” Atwan said in his article.

Al-Yamani’s participation in the conference was also condemned by the political bureau of the Yemeni popular movement, Ansarullah, which described it as part of a Zionist-American plot to normalize Arab countries’ ties with Tel Aviv.

The move by the foreign minister of the resigned government of Yemen indicates the moral decline of the mercenary government and its sponsors in the UAE and Abu Dhabi, the Ansarullah said in a statement.  “The Warsaw summit was a shame for all its attendees,” the statement said.

“It was even more painful to see Omani Foreign Minister Yusuf bin Alawi – always praised for his neutral stances and refusal to meddle in disputes among Arab countries – was the only Arab foreign minister to openly meet Netanyahu in front of the camera,” Atwan said in his editorial.

The meeting between bin Alawi and Netanyahu seemed so embarrassing to Omani media that two major newspapers, Oman and Al-Roya, did not even mention the meeting in their editions.

The handshake, however, built on another trip Netanyahu made in October when he met with Oman’s sultan, the first such visit in more than two decades.

One of Kuwait’s top officials, who had recently said the Persian Gulf country will be the last to normalize ties with Israel, was sitting a small number of seats away from Netanyahu at the conference in Warsaw, said Kuwaiti writer Fajr al-Saeed.

“The deputy Kuwaiti foreign minister is sitting at the same table as the Israeli Prime Minister Netanyahu at the opening of the Warsaw conference.  Why has he not withdrawn from the session[?] Has the Kuwaiti Foreign Ministry not said that we will be the last state to normalize with Israel[?]” Saeed tweeted.

The Palestinians, who boycotted the conference, have strongly protested the summit and the participation of Arab ministers.  Nabil Shaath, an adviser to Palestinian President Mahmoud Abbas, wrote in a column published by Israel's Haaretz newspaper that the Warsaw conference lacked credibility as it aimed to "normalize" the Israeli occupation of Palestinian territory.

"By fully siding with the Israeli government, [the Americans] have tried to normalize the Israeli occupation and the systematic denial of the Palestinian right to self-determination," he said.  Saeb Erekat, the secretary-general of the Palestine Liberation Organization’s Executive Committee, called it “an attempt to bypass” the Arab Peace Initiative.

The Arab Peace Initiative, proposed by Saudi Arabia in 2002, calls on Israel to agree to a two-state solution along the 1967 lines and a “just” solution to the Palestinian refugee issue. The initiative has been repeatedly endorsed by the Arab League in 2002, 2007 and 2017.