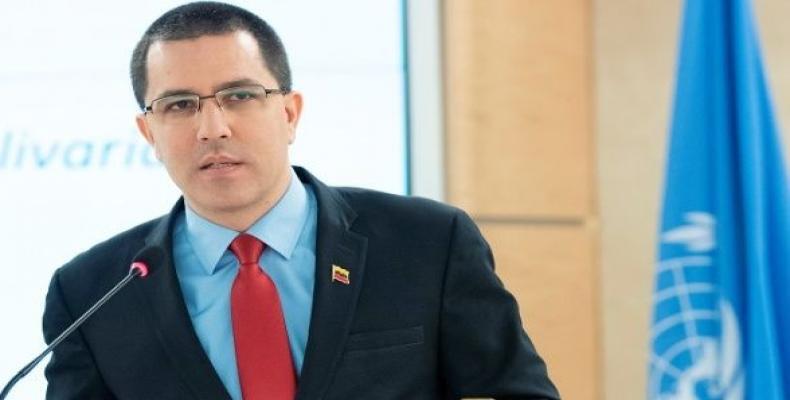 Geneva, February 28 (RHC)-- Venezuelan Foreign Minister Jorge Arreaza has appealed once again to the countries of the United Nations to act in the face of the U.S. interventionist aggression.

Speaking at the Human Rights Council of the United Nations in Geneva on Wednesday, Arreaza asked the international organization to speak out about the false flag operations Washington is using to justify a military intervention in Venezuela. "President Nicolas Maduro has been calling for dialogue between the disputing parties, but they have not wanted to sit down and talk because they come with strings attached," he explained.

The foreign minister also stressed to the Human Rights Council: “We’re calling for dialogue, dialogue with the United States. Why not between Presidents Maduro and Trump? Why shouldn’t they meet so that they can try to find common ground and work out their differences?” And, at the same time, he called for “dialogue between Venezuelan citizens.”

This Geneva trip comes on the heels of a special session of UN Security Council in New York, called by the United States to discuss Venezuela.

At that meeting, many countries, including those who have come out against Venezuela's government, rejected the use of force by the U.S., which Arreaza called a threat to Venezuela’s sovereignty and the rights of a free people as well as a violation of the United Nations Charter.