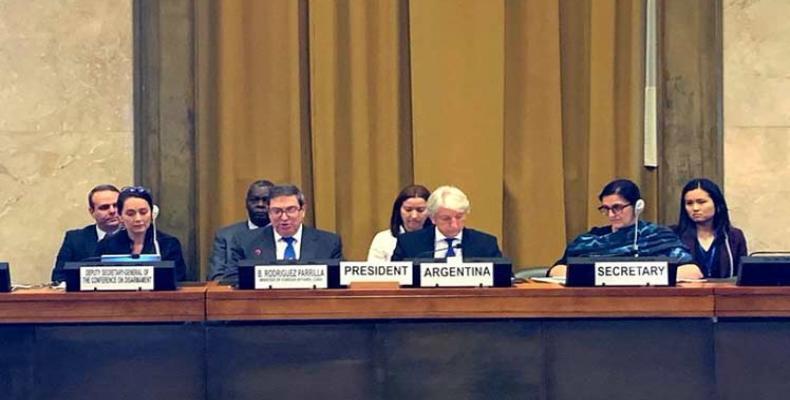 Geneva,  February 24 (RHC) --Cuban Foreign Minister Bruno Rodriguez warned Monday about the threat posed to the international community by the aggressive positions of the U.S. government, including its militarism and global expansion.

Speaking at a Conference on Disarmament, he recalled that in 2018 the U.S. military budget grew for the first time since 2010, reaching 649 billion dollars, and the existence of more than 800 U.S. military bases and institutions around the world.

He also denounced that Washington is promoting projects for the militarization of outer space and cyberspace and is covertly and illegally using information and communication technologies to attack other countries.

According to Rodriguez, this behavior of the current administration, headed by President Donald Trump, generates deep concern because of its strategy of domination.

In his speech at the forum, held within the high-level segment of the 43rd session of the Human Rights Council, convened in Geneva from February 24-28, the Cuban top diplomat also mentioned the enormous nuclear arsenal built by the United States and its disrespect for international agreements.

"We reject the decision of the United States government to withdraw from the Treaty on Short and Intermediate-Range Missiles signed with the Soviet Union in 1987, as well as from the Joint Comprehensive Action Plan or Nuclear Agreement with the Islamic Republic of Iran," he stressed.

For Rodríguez, the world community cannot remain passive or silent in the face of the threat posed by Washington's nuclear posture review, which lowers the threshold for consideration of the use of nuclear weapons, even in response to so-called 'strategic non-nuclear threats'.

According to the Cuban Foreign Minister, in the face of the increasingly dangerous and complex international scenario, the response must be to preserve multilateralism and respect for the purposes and principles of the United Nations Charter and International Law.